The Mac adepts amongst you probably already knew this, but VMware is coming with Fusion 3. It is scheduled to be released at Oct 27. 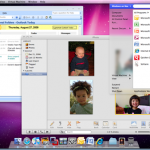 VMware Fusion gives you the possibility to virtualize on Apple Macintosh computers.

PALO ALTO, Calif., October 6, 2009 — VMware, Inc. (NYSE: VMW), the global leader in virtualization solutions from the desktop through the datacenter and to the cloud, today announced that VMware Fusion 3, the best way to run Windows on the Mac, will be available worldwide on October 27 and is available for pre-order today. VMware Fusion 3 makes it easier than ever for users to move to the Mac and to run Windows applications – including graphics-intensive games – alongside Mac applications, with a Mac user experience.

VMware Fusion 3 will include more than 50 new features and enhancements, delivering a better-than-ever Windows on Mac experience. Key highlights include:

Registration for VMworld Europe 2011 is open

Intel selling half of its VMware shares

10 things you should know about Cisco UCS