Today was a special day, VMGuru.nl celebrated it’s 1 year anniversary and to celebrate VMware organized a party, how thoughtful ;)

Seriously, today we attended the VMware Partner Forum at Bussum in the Netherlands. So at 5:45 my alarm rang because we had to be in Bussum at 8:30. We arrived tight on time and after a cup of coffee we attended the keynote ‘Energize Business Through IT!’ Here VMware told us how important their partners were and what business to focus on during these difficult times and Jeremy van Doorn presented the news from VMworld 2009.

After a refreshment break it was time for our first breakout session. Anne Jan and I went to ‘5 great reasons to upgrade customers from VI3 to vSphere 4‘. The title says it all, convince customers to upgrade based on better scalability, flexibility, manageability and integration.  This session was completely my style, to the point, not too technical and without basing of the competition (as many of the other vendors do, much to my disgust). Citrix XENServer and Microsoft Hyper-V were mentioned and compared but the conclusion was all up to the listeners. 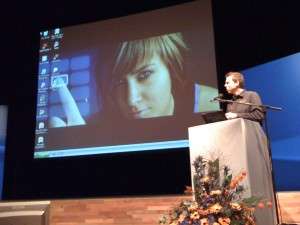 At 11:30 our second session started, ‘Enhancing the user experience with VMware View‘ by Ton Hermes. Ton has a very nice and attracting way of delivering his presentation so although nothing really new was presented during this presentation it’s was a very attractive presentation. But that was not why Anne Jan and I attended this breakout session. After the PCoIP demo at Cannes and many YouTube videos we had never seen the final implementation of PCoIP in the wild. Willem van Engeland gave a demo using a VMware View environment in a (PQR) datacenter in Amsterdam over a 10Mb Internet connection. During this demo he showed working with Acrobat files, editing Powerpoint presentations, played a local video of VMworld 2009 and to top it of he showed us a HD video from YouTube. The user experience was very impressive, smooth, super fast and without problems, hick-ups or other inconvenience. I’m very anxious to get my hands on the final product.

Then a good lunch with good food and drinks and of course networking with other partners. One of the guys we spoke to was Danny Claproth from Vizioncore. He gave us a cool demo of vFogLight, showed us a sneak peek at vFogLight 6 and showed us the new beta version of VESI. A very handy new feature are the ‘Best practice queries’. Here you can find a wide range of standard queries like ‘Show me all nics with a bandwith which is lower than 1Gbps‘, ‘Show me all VMs which have a CD-rom connected‘, etc.

Next to the Vizioncore stands was a stand by CDG Education, one of the biggest training providers and license resellers in the Netherlands. They had a XBOX360 competition, the person who could set the fastest lap time with SBK08 with a Ducati at Monza won a XBOX360. A some of you may know, I have one passion with regard to computers next to VMware and that’s racing. I don’t have a whole lot of games but the games I own are all racegames. Need for Speed, Forza, MotoGP08, etc. So I decided to give it a go. The result? The fastest time with a time of 1,49 so at 16:15 a CDG representative handed me a brand new XBOX360 Arcade! Thanks very much CDG!!

During the after noon we attended two ore sessions. A ‘VMware Hosting Update‘ were Bart Schneider brought us the hosting news and we found out that our company lacks the effort to sell/use VMware hosting were other partners go skyhigh based on VMware’s hosting model. So another task on our to-do list.

The last sessions was a very enlightening session by Maurice Riksen, our VMware Partner Manager. Maurice brought us all the news on VMware’s new Partner and Competency model during his ‘Profit from your knowledge’ presentation. We now know what to do to obtain the new Competenties. As a VMware Premier Partner our achievements are evaluated February 15th, so that’s the time we have to pass the last exams and provide VMware with a few reference cases. So a second task on our to-do list.

After a last drink I collected my XBOX360 and we all went home, satisfied and with a filled to-do list.

VMware thanks and we will definitely attend in 2010.

Also a special thanks to CDG! The XBOX360 is great!

All other vStuff, Whitepapers & How To's 54