Home > All other vStuff > Hyper-V R2 vs vSphere: A feature comparison

by Erik Scholten 2 December 2009
All other vStuff 3

At the end of May of this year we wrote a article concerning Hypervisor comparisons and we got a lot of positive feedback on it. The downside to that is that people want an update as soon as one of the companies launches a new version of its product, and who can blame them. However the issue is that this takes a lot of research and because of that, a lot of time. And because two of us are ill and in bed wearing a sombrero ;-) and the other two are extremely busy, we simply don’t have that time right now.

However, Scott Lowe has written an excellent article on the feature comparison between VMware vSphere 4 and Microsoft’s Hyper-V R2 which is a must read for everybody who’s advising customers on hypervisors.

It’s not as extensive as the Enterprise hypervisor comparison we did earlier but it gives you a good image how both products relate to each other. To extend the picture I added a list of supported operating systems. 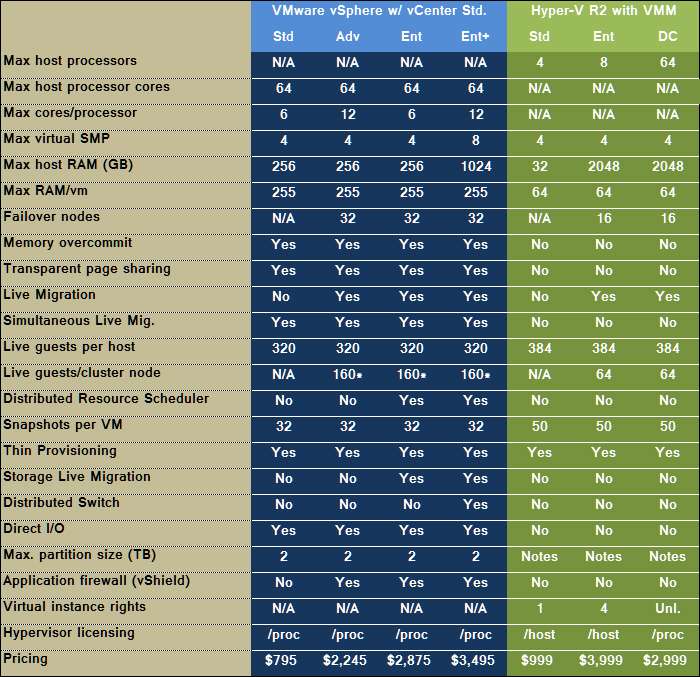 Microsoft was late to the virtualization game, but the company has made gains against its primary competitor in the virtualization marketplace, VMware. In recent months, both companies released major updates to their respective hypervisors: Microsoft’s Hyper-V R2 and VMware’s vSphere. In this look at the hypervisor products from both companies, I’ll compare and contrast some of the products’ more common features and capabilities. I do not, however, make recommendations about which product might be right for your organization.

This table compares items in four editions of vSphere and three available editions of Hyper-V R2. Below the table, I explain each of the comparison items.

In my opinion Hyper-V R2 is an improvement to the first version but it still lacks a lot of enterprise features and a management & automation suite to challenge VMware vSphere. It’s nice to setup a lab environment but I would not advice customers to deploy it as the foundation of an entire enterprise.

True, Hyper-V sometimes scales better on the host level but what’s the use when you can’t use it in a VM because it scales at a quarter of a vSphere VM.

True again, the cost of Hyper-V are sometimes lower than that of a VMware vSphere environment but purchase costs alone are a bad measure to base your enterprise’s foundation on.

The point I’m still very disappointed about, is the limited support for different operating systems in Hyper-V. True, I don not see the use for support of MS-DOS 6.22 and I’ve never seen a customer running Sun Solaris on a hypervisor but I regularly run into customers running Windows NT, CentOS, SUSE Enterprise server 9 or Red Hat Enterprise Linux 5. I even ran into a customer who wanted to virtualize a business critical Windows 98 desktop. Despite most of them are Microsoft’s own products, these are simply not supported on Hyper-V.

So one year later, Microsoft Hyper-V has come a long way but  I still stand by my opinion I published at December last year, ‘Hyper-V, (still) not in my datacenter‘.