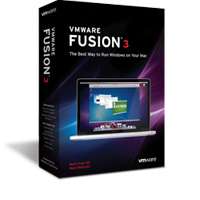 The VMware Fusion Team has been working around the clock to add new features, improve performance and fix over 50 bugs to give out a very nice product to the Apple loving colleagues.