First of all, a happy newyear to you all!

With 2009 behind us, we look forward to a new and intense 2010. Personally, I think 2010 will be a very interesting year. With the world economy leaving the ruins of the crisis and alot of new trends and technology introductions ahead, we are in for quite a treat. Also, we are eagerly looking forward to VMworld in Copenhagen, later this year. We hope to see a lot of you in Denmark!

However, a quick look back is in order too. In 2008, VMguru.nl kicked off with a very small group of followers and in the beginning we only had a very limited public, mostly techies, mostly dutch, mostly familiar people. In 2009, the group slowly got bigger. With VMworld in Cannes we saw a huge increase in hits at the site. Traffic went through the roof as it had never done before. This very clearly shows in our yearly stats. After the big rise in march, we experienced somewhat of a drop in april but in the following months the numbers started to climb. Month after month more followers viewed our site. Another trend also displays itself. The people following us at twitter are not just the migration and implementation techies, we also see virtualisation enthousiasts, company administrators and hobbyists joining us.

So, all in all, 2009 was a pretty succesfull year for VMGuru.nl. December displayed a new record too. We passed the 1.5 million hits per month mark! This is more than 600% above the amount of hits we had in january! Needless to say, we are very happy to see so many people on our site (and a bit proud too, tbh :)) I made a little statistic to show you how we did in 2009. It displays the amount of hits per month in 2009 from january to december, with december as top of the year. 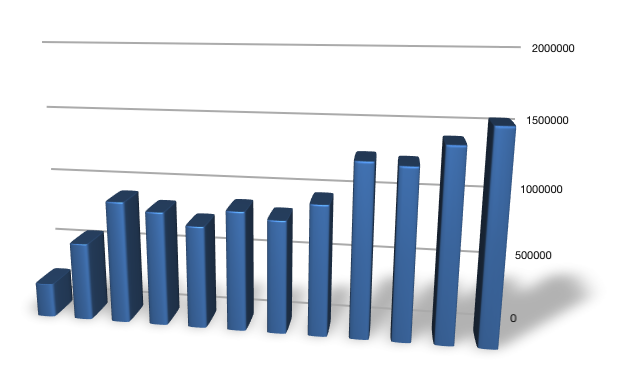 So, to conclude this posting, we here a VMguru.nl wish you all a very succesfull and interesting 2010. We hope to see more of you on our site as we continu to do what we think we do best: being creative, inventing, experimenting, growing, taking risks, breaking rules, making mistakes, and having fun!