During the last month I have been very busy building a new infrastructure at a client site. I’m responsible for the overall technical solution and the basis, a VMware vSphere infrastructure build on five Dell PowerEdge R805’s, Dell EqualLogic PS5000 and 6000 storage and Cisco switches for LAN, DMZ and IP storage networking.

In the last few years that I have been working with virtualization I have always been a fan of a static network configuration. Meaning, when I configure ESX networking I like my network interfaces and physical switch ports to be configured at 1000MB full duplex if the switch/network interface combination allows it. The idea is that if you purchase gigabit network interfaces and switches you know the maximum speeds. So you configure it to run at it’s maximum capacity, eliminating overhead and using as much bandwidth as possible purely for data transfer.

So when we experienced slow network performance I had a colleague check the Cisco LAN switches for errors, drops, packet loss or any other flaw which might indicate a speed or duplex mismatch. None were found so I assumed that the network configuration was not the issue. But as we know by now, ‘Assumption is the mother of all fuck-ups!‘.

Then I found that DRS had moved one of my test servers to a different ESX host. To rule out the physical network and other load on the ESX host I moved both servers to a free ESX host and was amazed by the network performance …….. 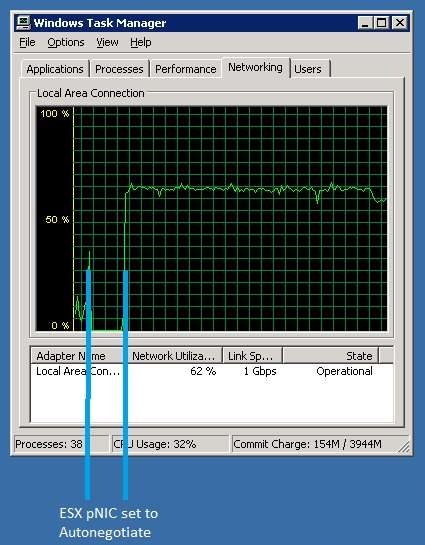 When VMotion moved my test servers to the free ESX host the network performance went from 15% to  65%. This meant that the problem was in the physical network. To substantiate my findings I moved the test server around from one ESX host to another which resulted in the network graph on the  left.

So, I pinned it to the physical network but, as mentioned above, the switch didn’t show any error, drops, retransmits or packet loss, whatsoever. I immediately checked the settings on the physical switch ports because I suspected that they were set to auto/auto but this wasn’t the case, the switch ports were fixed at 1000MB full duplex.

So bottom line, when network performance is slow, check and change your network interface speed and duplex settings and do NOT rely on the switch-port statistics.

Next up is solving the 33 MB/s bottleneck in Windows. Although we can achieve speeds up to 100MB/s with IOMeter, a simple Windows file copy never exceeds 33 MB/s. We tried changing the Auto tuning level, Chimney, Receive side scaling settings but with no result. When we start multiple file copies the combined speeds go up to 70 MB/s. So it looks like Windows is limited at 33MB/s per thread or something.

We haven’t been able to fix this so any help, comment, hints and tips are welcome! 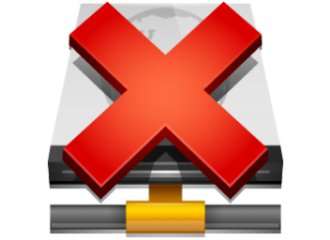