The Zimbra Collaboration Suite Appliance: after the first week

Last sunday I took our Zimbra appliance into productionmode. About one week has passed and I must say, I still don’t regret the choice. Even with my 2 gigs of mail, Zimbra seems to be coping fine. I did notice a few things that could be improved though. But hey, which product is perfect? There’s always something to be done or someone with a brand new idea.

Things I’ve noticed over the past week

Well.. As I mentioned in the first post, I did notice that the Zimbra appliance was eager to get more RAM. As you can see in the graph below, taken from our monitoring system, it adores the 4 gigs of RAM I’ve given her. In fact, looking at that graph and with the userload in mind, you tend to add even more RAM. 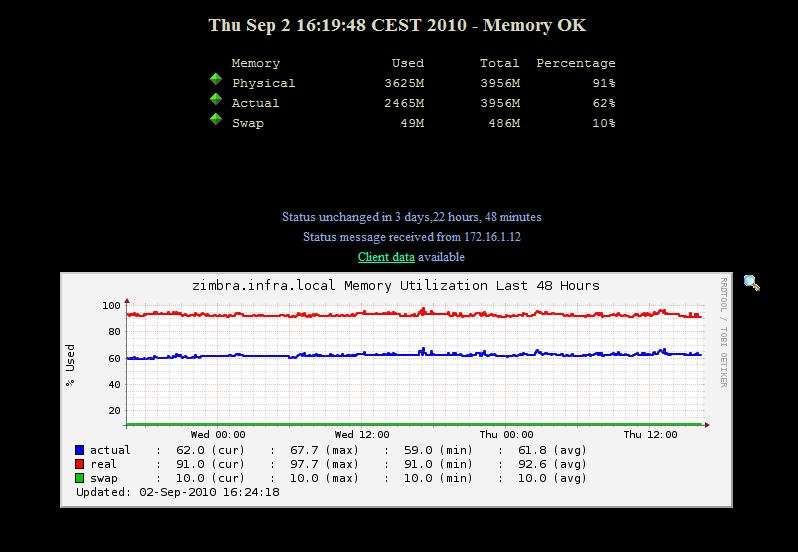 Besides the RAM usage, a significant CPU load is also displayed. In fact, ‘something’ is keeping Zimbra and the applied CPUs busy all the time. Most of the time, it’s JAVA related, but some systemservices are seen quite often as well. Over the past week, the CPU graph looks like this: 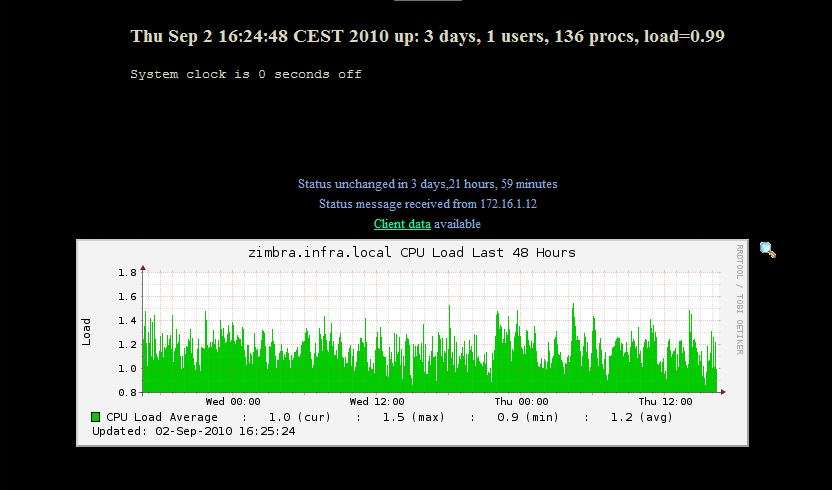 To correctly interpret the numbers, check this explanation about UNIX/Linux load numbers. Now, I must say that I took the appliance ‘as-is’. I did not modify any settings within the system itself, apart from the resources for the VM (it now runs 2 vCPUs and 4 gigs of RAM). It seems to me that some tweaking is necessary to lower the systemload and guarantee optimal performance when the user-load does go up.

Zimlets are a cool thing. With Zimlets you can extend the functionality of your Zimbra server. You can add all kinds of nice and usefull (or less usefull) add-ons. The way to install Zimlets however, is not quite idiotproof. You have to have proper unix knowledge to do so. When I tried to install a couple of Zimlets, I ran into another problem. The appliance version of Zimbra does not have SSH enabled, which means, I was not able to follow the usual install procedure and I am having a serious hard time to transfer any files to the appliance itself. A more convenient way would be much appreciated, in my opinion.

As I mentioned in the first post, using the option ‘External Accounts’ has some challenges. With POP3, all is fine, apart from the fact that all mail is being regarded as new. It’s fine to pull other accounts in, but it’s no good for migrating mailboxes. IMAP on the other hand, has some issues. As I understand it, Zimbra pulls the contents of the IMAP mailbox locally and then displays it to the user. When I tried that with my 2 gigabyte Gmail mailbox, it went flatface. It pulled about 150mb from the account, ran into an error and didn’t got out of it again.

To migrate my contacts I have on my Macbook Pro, I added a CardDAV account and pointed it to the Zimbra address. This did not work. Somehow I managed to get it to work on my Macbook Pro, but when I tried to do the same with my girlfriends Macbook yesterday, it failed. Although I used the exact same settings as I did on my own Macbook Pro, it simply didn’t work.

For the first time ever, I noticed an Import/Export option in the settings of a webclient . As I was not able to migrate my girl’s contacts using OSX’ Addressbook, I exported it to a general VCD file and imported it using Zimbra’s webinterface. I was surprised that it immediately recognised the format (CONTACTS) and imported everything swiftly and without any issues. Even the contactphoto’s were in! The same thing worked like a charm with importing my calendar appointments. I was amazed by the speed and completeness of this ‘insignificant’ option.

I moved from using Gmail on my mobile (android) device to Zimbra. I also use an MS Exchange account. The good thing I noticed is that the speed and convenience is incredible. In the same second I receive a message in the webclient, my phone signals that there is a new message as well. It’s noticeably faster than Gmail, it’s even noticeably faster than Exchange! And it is very easy to set up. My girl’s mobile phone was set up within 5 minutes, and that includes transferring and importing the CACert.org root certificate. Now her phone buzzes with new email just as often as mine does ;) We both sync our mail, contacts, appointments and tasks using the MS Exchange profile on our mobile devices. It couldn’t be more comfortable!

So, all in all, some problems, some good things. No real showstoppers. I will get into optimising performance and solving some of the smaller things in the coming week. I already saw some tips in the comments of last week’s post about Zimbra. I will dig into that and get back in a few with the measures that worked and the results it had.