During VMworld Europe 2010 in Copenhagen I will be keeping a diary to show what a blogger’s life is all about.

A loud bang on the door, Alex moving towards the door so I can turn over again and fall a sleep…

Time for a shower pulling the shower curtain around me now to find that water lever again, still not away while the water is plunging on top of my head. Feels good!

Breakfast time, I see a lot of sleepy heads of people moving through each other in complete chaos around the food and beverage tables. Gets easier and easier to move swiftly through the mass to my goal.

Time to move to the Bella Center, we bump into Eric Sloof and Victor van den Berg who tell us that the keynote of this morning is canceled. We will see when we get there otherwise coffee time and lots of it.

Session is canceled so solutions exchange it is, where we bump into Scott Herald just when we round the corner by the Dell booth. After some chit chatting we get about Quest and their new products, where Scott offers to do some interview or demo about it So we move with the complete crew to the Quest booth where we tape some nice footage for the website about Quest products. 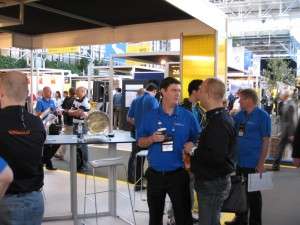 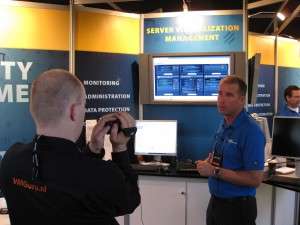 While Anne Jan is busy taping the session Erik and I start a conversation with AppSense the neighbor of Quest on the Solution Exchange. We agree to do some footage there also but the person who can tell us something about the product is not there yet so we will come by later today.

While wrapping up the session we bump into Scott Bennett the Director of Central Europe for the Server virtualization group of Quest. We always have some nice discussions about clouds and the way there is a difference between countries and which adopt new innovations faster than others.

Time to move over the Solutions Exchange towards the bloggers lounge. 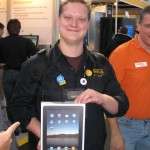 We are at the VCE booth where they give away an iPad in their hourly raffle. A few numbers are being read out aloud but no one has that, then a number pops up some has. It is Joep Piscaer who wins an iPad 16 Gb.

Back to the bloggers’s lounge for some more blogging and getting movies, photos and articles ready.

Erik is going at the iPad again :D he moves quickly to the VCE booth, but unfortunately he doesn’t win one at this time, maybe later on he has more luck.

Unfortunately none has won an iPad but still fun to see so many people packed together waiting in a raffle. We return swiftly to the bloggers lounge where Anne Jan is guarding the equipment while editing the video that was taped earlier this morning on the Quest stand. 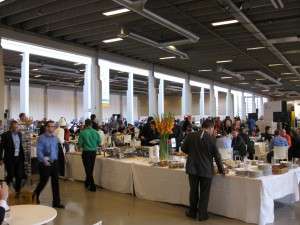 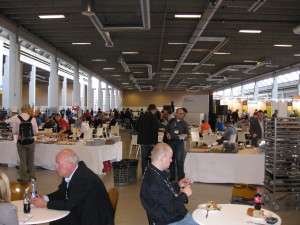 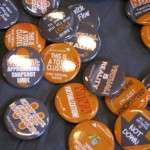 Time for some more Solution Exchange strolling. We visit several booths including the Solarwinds stand where they have some very nice and cool stickers and buttons with all kinds of lines. Solarwinds most people know of from the tools and utilities in the past but they do have some very nice ones for VMware also. So check out the tools and utilities there and find an appropriate button or sticker that fits with how you are :D 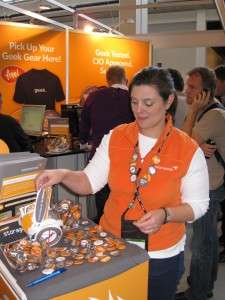 After the Solarwinds booth Anne Jan and I round the corner and end up by the Baracuda booth where they have some nice appliances which will be available in vAppliance form soonish.

Next to the Baracuda booth is the Nimbula booth the Cloud OS we get a demonstration there about Nimbula and I must say it looks good and sounds even better.

On the Centrix Software stand I bump into Jane Rimmer which I know as @Rimmergram always good to meet up with people you know from twitter or blogging and get a face with the name.

I have two demo’s booked by the NetApp booth so I get there swiftly, where I get some really good information. Thanks Dean and Scott for your time and enthusiastic way of explaining things.

Doing a last lap on the solution exchange today before I move to the bloggers lounge to get some work done.

Back at the bloggers lounge where John Troyer is busy with VMworld Live TV, for the last session he is looking for vExperts for a round table talk. He looks at the vmguru crew and asks which one of us is the most representative on television, we all point at Erik. Sorry mate :D So Erik is dragged into the show by John and also Alex Mittel joins in now John is looking for a third one, so I volunteer but luckily for me a third blogger just enters the bloggers lounge so I am excused and go further with the blog post I am working on. Erik is live on VMworld TV.

Getting the coat quickly before they look the place up and I know it is chilly outside so don’t want to go without.

Arrived at Forum station while leaving the station a huge banner on the right building pointing us to the right direction.

Our badges are being checked accurately by some security guards and some nice friendly ladies. The party is getting into full swing. There is food located on several isles and scattered around the room are different bars. In the middle is a big podium and to the right side is the arcade part available, where on the left side is a big podium for the performers to do their thing.

First to get some food before we start strolling the big room but where can we leave are coats? While eating the food I find out that we can hand over our coat on the far right. SO we move around after we finished our plate to hand over the coat.

So time for some arcade games. First lets shoot some gophers , that was fun J We dare to do some agility game where you have to tap buttons that randomly light up within 30 seconds. That was fun managed to get 34 in 30 seconds, it is harder than it looks like. Time for a beer I say ;-)

Some very nice act starts on the main stage where a few ladies do some very acrobatic things in the curtains hanging there.

The guys wanna race in some true formula 1 car so they queue till they can race. Anne Jan and I try to get to the balcony for some nice pictures and video but we cannot get passed the security guy there. 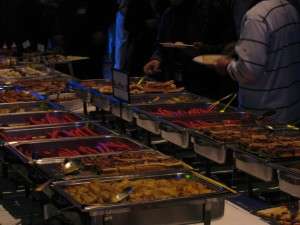 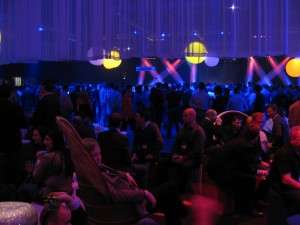 The main acts on the podium on the left is delivering some really awesome music and show so I move around and sneak to the right side of the podium where I can get up to the front of the podium with my photo camera for some nice pictures and video impressions. After a while the rest of the clan finds me there next to the bar and only a few feet from the main stage.

After the first act there starts some breakdance act in the middle of the room on the center podium to keep everyone busy while the technicians swiftly convert the podium for a new music act.

This  revival act of ABBA is great and I must say it is a great party! (for more party photos also see the photo gallery and the impressions of yesterday)

The VMguru crew is leaving the Forum to get to the subway station and get back on the subway to bring us to Orestad station.

Arrived at Orestad metro station where we decent the stairs to street level and make our way back to the Metro Cabinn hotel. Gerben almost tripped over some pavement a lot of us have tripped over in the last couple of days.

We arrive back at the hotel where it is still buzzing in the hotel lobby with people getting a last drink for the night.

Trying to find out how to get to the Zimbra breakfast meeting tomorrow morning in the Scandic Hotel. The internet connection is very slow again in the hotel so have to be resourcefull to get the correct maps on screen where I can figure out which metro station we have as a destination.

Alex is busy with rendering photo’s I took today on the VMworld party and earlier today while strolling the Solution Exchange for news.

Finally I found the correct metro station to go to in the morning and marked the destination on the map with a big X. Have to transfer on Norreport station to go south bound.

Shall I go to bed or do some text lines for the Wednesday diary blog? Choosing for the last one otherwise it will be a very busy day tomorrow and can’t finish everything in time. So blogging it is.

Time to get into bed because Alex and I have to be up again in less than three hours from now.

Lights out and good night all.

How to build a virtual datacenter