The second day of VMworld Europe 2010, which is actually day one for none VMware Partners, as usual, the key note session opens with a video. This time, it’s a ‘fake’  documentary discussing ‘What is the cloud?‘ The video compares “cloud computing” to pizza and to The Matrix, where the narrator of the documentary goes to visit the Oracle and is told his mind is a dumb terminal. Besides that there are funny references like the Azure blue skies. Pretty funny!

After that Maurizio Carlo opened the keynote session with the message that VMworld is not about VMware delivering, its about customers, developers, partners interacting together to shape the future of virtualization.

The VMworld event in Europe has grown bigger and bigger. Last years in Cannes there where 4500 to 4700 attendees. This year VMware set a target of 5000 attendees but despite the difficult economical times VMworld Europe 2010 attracted 6000+ attendees.

Next on stage is Rick Jackson, Chief Marketing Officer at VMware

After that it’s a small repeat from yesterday’s Partner session where Rick describes the three phases from IT production to Business production ending with IT as a service. Where the main driver changes from cost savings to quality of service and ending with business agility.

Next up is VMware CEO Paul Maritz.

Paul continues with the huge VMware support worldwide with 190.000 customers, 50.000 professionals and 25.000 partners. So VMware’s technology touches all industries.

This has big implications:

But is it enough to have old applications on top of a new infrastructure? No, the ongoing theme of new VMware products is the combining, automating and managing all resources and bringing them together.

These are challenges which the IT industry has to address and VMware does this by combining private clouds with service provider clouds. VMware calls this the secure private cloud which uses new open frameworks and tools like VMware’s Springsource. VMware, Google and SalesForce together use the Springsource framework to get portability between clouds.

Next Paul mentions SaaS. SaaS is coming into the virtual environments and it is like PCs got into companies many years ago leaving IT to clean up the mess. The problem is that companies use multiple SaaS providers who have no integration with the company infrastructure, so users need many different username and passwords.

But unfortunately it’s unstoppable, it’s a challenge so IT has to manage application delivery and not user provisioning. We cannot stop new devices like iPads and Android devices coming into our corporate environment, we have to deliver applications to all devices and manage them.

Next is the presentation a lot of techies have been waiting for. Steve Herrod, VMware’s CTO is famous for his cool presentations.

Steve starts explaining the role of VMware vSphere combining all your resources into a huge, crisp pool of resources which you can use as needed. This is know by many different names like software mainframe, giant computer or virtual giant. Steve prefers the Virtual Giant.

The Virtual Giant should be open and interoperable, automated thru policies, have an elastic resource scheduling and efficient pooling. With vSphere 4.1 this virtual giant is very much alive, delivering cloud scalability. The new 4.1 release has many improvements making the resource pool more flexible and agile. 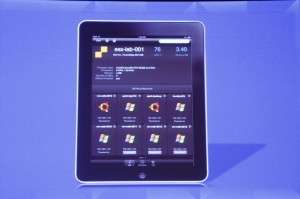 Following this Steve announced the availability of the vSphere client for the iPad which will be available in the App Store at the end of this month.

Because management is key in virtualized environments VMware recently bought a company called Integrien which delivers a management platform which can show you the infrastructure top-down. With which you can drill down to the application which is causing or experiencing problems (see the pictures below). 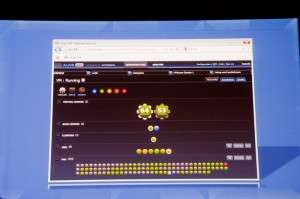 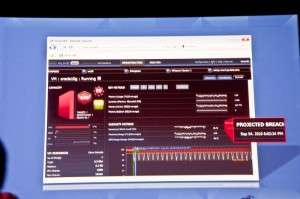 In the past we were used to provisioning hardware but customers just need an application. We need to combine the hardware and software provisioning into a IT service catalog. This needs to be secure, delivering apps to users needing them and shielding them from others, role based. Usage should be charged on a pay what is used basis and we need to add a self service model so the IT department can do what it is good at. This can be achieved with VMware’s vCloud Director which is available now

Security is an issue again, VMware vShield product range can create the logical security boundaries Paul talked about earlier. To achieve this VMware’s partners with Cisco, RSA, Intel, McAfee, Symantec, Trend Micro to build on the vShield to create the security customers need.

After this Steve demos the VMware vCloud Director which is available now. A very cool demo where we saw how a complete datacenter/cloud can be divided in smaller portions giving customers, departments and even service provider customers their own small portion which they can manage by using their own web interface.

After this comes the part I personally have been waiting for, ‘Project Horizon‘. Project Horizon will be the one shop stop for your IT resources combining SaaS, VDI, Web Apps, etc into one interface which uses single sign. This is why VMware bought Tricypher a while ago.

Project Horizon will take application deployment to a new level, it will be like the Apple AppStore or Citrix Dazzle but much more extensive as it will include single sign on, SaaS/VDI/WebApps integration, etc. Watch the demo Steve Herrod did below!

The keynote session ended with the new stack of IT as a service. 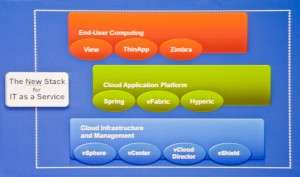 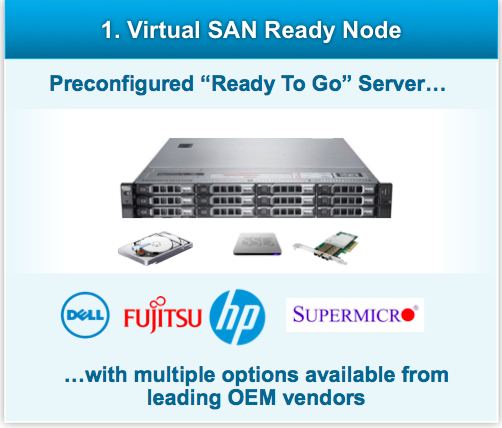