Home > All other vStuff > ESXi 4.1 installation fails – Unable to find the system image

Earlier this week I already told you that I’ve build a new ESXi whitebox but I had some problems installing it.

OK, first of all, what was the situation? I wanted to install VMware ESXi 4.1 Update 1 to a USB stick which is VMware certified.I plugged the USB stick into one of the USB ports on the back of my whitebox server and downloaded the ISO-image form the VMware website.

A quick installation and I’m ready to build my new lab environment. WRONG!

The installation fails with the following error:
‘Cannot install VMware ESXi 4.1 “Unable to find the system image to install’

My first idea was that the download had gone wrong, wrong ISO-image, MD5 hash not correct, etc. So, I downloaded the ISO-image again and checked the MD5 hash. Again the installation failed. 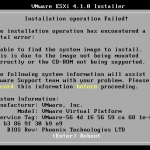 The second idea was a faulty DVD player, so I swapped it with the one in my old ESXi server and the installation failed a third time.

Next up, installing VMware ESXi 4.1 Update 1 on my old server which has been working fine for a few years. Wrong again, same error more cursing….

I upgraded my old server to ESXi 4.1 two or three months ago, so I got the old VMware ESXi 4.1 DVD out and tried the installation again. Fifth failure in 20 minutes, now I’m getting p!ssed.

To keep a long story short, I disconnected disks, changed BIOS settings, changed USB sticks and almost gave up hope when I found this article on the VMware Community site.

These people had the same problem and tried most of the steps I mentioned earlier. But the response of RPrins caught my eye. OK, I’ve tried installing another version of ESXi but that was also ESXi 4.1 without Update 1. What if I tried ESXi 4.0 Update 2 instead and YES, after struggling for 1,5 – 2 hours the installation succeeded.

Apparently there is an issue when installing ESXi 4.1 or 4.1 Update 1 on some computers. I know some of you will try to blame my fantastic new ESXi whitebox but there are plenty of people experiencing the same issues on VMware certified, server, A-spec hardware.

The resolution is actually quite simple. Just install VMware ESXi 4.0 and upgrade it to ESXi 4.1 Update 1 using the update zip from ESXi 4.0 which you can download form the VMware download website or the vSphere Host Update Utility that comes with the vSphere client installation. 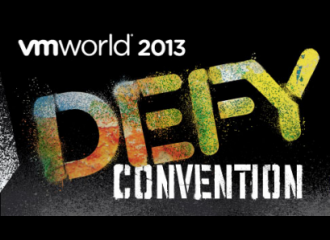