With the introduction of VMware vSphere 5, VMware introduces a new licensing model. VMware will retain a per processor model but they  removed some restrictions which were in the vSphere 4 licensing model. This is mainly regarding the number of cores per processor and the amount of physical memory in a host on which vSphere 4 could be deployed. With vSphere 5 it does no longer matter how many cores or amount of memory a ESXi hosts has.

Instead of the physical restrictions, VMware introduces a single virtualization based entitlement of pooled virtual memory (vRAM). According to VMware, this will simplify the process of purchasing deploying and managing vSphere while facilitating the move to shared infrastructure as a service.

vSphere 5.0 will be licensed on a per-processor basis with a vRAM entitlement. Each vSphere 5.0 CPU license will entitle the customer to a specific amount of vRAM, or memory configured to virtual machines. The vRAM entitlement can be pooled across a vSphere environment to enable a true cloud or utility based IT consumption model. 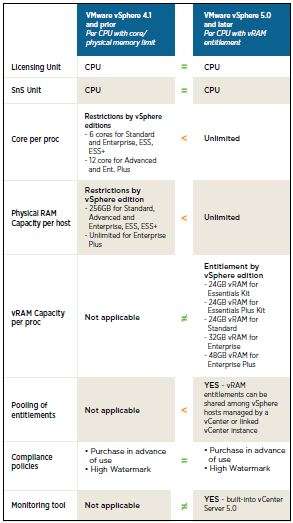 The vSphere 5.0 licensing model is per processor with pooled vRAM entitlements. According to VMware, this should offer customers the following benefits relative to the previous vSphere 4 model:

Flexibility – Extends the concept of resource pooling from technology to the business of IT by allowing aggregation and sharing of vRAM entitlement across a large pool of servers.

Fairness – Better aligns cost with actual use and value derived,rather than with hardware configurations and capacity.

Evolution – Allows customers to evolve to a cloud-like “pay for consumption” model without disrupting established purchasing, deployment and license-management practices and processes.

In all fairness, with this VMware introduced the much criticized virtual machine based licensing ‘with a twist’. Because they now license based on the amount of allocated vRAM, you’re much more limited in the total number of deployed virtual machines than you where when you were limited by physical memory and processor cores.

I’m afraid this may backfire on VMware, especially when in competition with Microsoft or Citrix.

I also see an upside though, this may prevent customers from physical-server-like sizing and over-provisioning virtual machines with way too much memory.

So, in simple words, you buy a processor based license which entitles your to a limited amount of vRAM per processor. You can then pool all vRAM entitlements across your complete vSphere 5 virtual infrastructure. The total amount of memory allocated to virtual machines (vRAM) must be equal or lower than the total pooled vRAM capacity.

You can increase the pooled vRAM capacity, if necessary, by adding more vSphere CPU licenses  of the same edition to the vRAM pool. This could create a strange situation where you have more vSphere processor licenses than the total number of physical sockets/processors in your environment, just to measure up to your memory needs.

Alternatively, you can upgrade all processor licenses in the vRAM pool to a vSphere edition with a higher base vRAM entitlement.

To prevent a sudden shortage of vRAM capacity, you can monitor the amount of pooled vRAM capacity available and consumed using the licensing-management module of VMware vCenter Server. Customers can create reports and set up alerts to obtain  automated notification of when the level of vRAM consumption surpasses a specified level of the available pooled capacity. 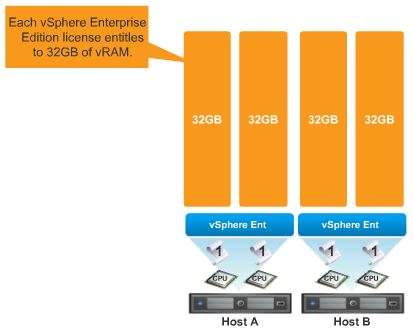 In an environment with two hosts each containing two processors, licensed with a VMware vSphere Enterprise license per processor. Each processor license entitles the customer to 32GB of vRAM. Instead of using silos of vRAM where each processor has only 32GB of vRAM to use, you can pool the total amount of vRAM across the entire environment. So one processor may use more than 32GB of vRAM, when another processor is using less. 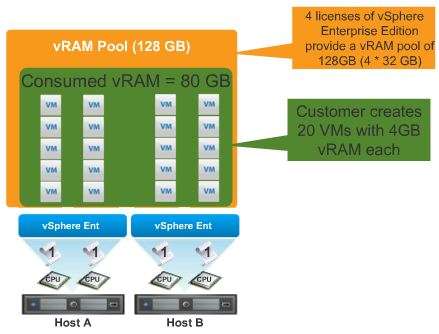 So with pooling you create a vRAM pool of 128GB for your total virtual environment.

When you now create 20 virtual machines with 4GB of vRAM each, you utilize 80GB of vRAM from your pool. So this environment is compliant with its vSphere 5 license model. 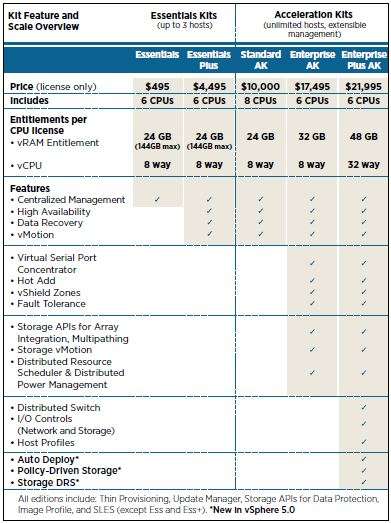 In the table on the left is an overview of the vSphere 5 version which are available. with the release of vSphere 5, VMware has dropped the vSphere Advanced edition. You can also see the amount of vRAM licensed with each version.

When you’re now designing a new virtual infrastructure or are planning to extend your existing one you need to look beyond the features to determine the needed vSphere license. 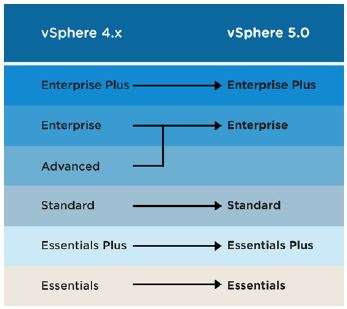 The next ‘challenge’ is to migrate customers from the old to the new vSphere license model.

The only in-consequent scenario is when a customer has vSphere Advanced edition licenses. As mentioned above, VMware has dropped this version.

But to compensate vSphere Advanced licensed customers they receive a vSphere Enterprise license instead.

Use Core Server when deploying Windows on a virtual infrastructure?