After a short introduction the Q&A started and below you will find my top 10 questions.

Q1. Are the old, vSphere 4, constraints in vSphere 5 still current?

Until vSphere 5 the best practice is a maximum of 8 hosts in a cluster, because of linked clones in VMware View and the primary/secondary ESX(i) hosts setup in an HA cluster. In vSphere 5, VMware changed this to a master/slave setup. When the master ESXi host goes offline a new master is elected within 15 sec. So, the cluster boundary limits VMware vSphere had in the past are gone. This is a huge advantage of vSphere 5.0.

Q2. With the improvements in vSphere 5 and HA, are the advanced HA settings all gone?

After this question, Duncan wants to clarify some misinformation regarding datastore heartbeat.

The datastore heartbeat is only used to confirm an ESXi host isolation. So, the datastore heartbeat is not used when VMware vSphere is in its normal mode of operation. It works by placing a file on a datastore which is touched every 5 seconds. When one of the hosts detects an isolated host, HA will try to validate the isolation by either touching the file (NFS) or checking if the host has the file open (VMFS).

HA works by installing an agent on the host. This is not different for VMware VI3.5 or vSphere 4.x, 5.0 enabling HA will install an agent to all versions and HA will work. There’s one important note though, you will have to have a certain patch level on ESX(i) 3.5 to support that.

Q4. What are conditions that prevent DPM from powering down a host?

Q5. What is the formula/mechanism DRS uses to detemine which VMs to move to other hosts?

If ESX wants to balance the cluster, DRS inspects the reservations and resource entitlements. DRS than picks the virtual machine with ‘the biggest bang for a buck‘ . DRS chooses the virtual machine it can move with the least amount of effort to restore the balance in the cluster. To ensure the least amount of effort to balance the cluster. It doesn’t have to be the biggest virtual machine, DRS uses a cost/benefit/risk analysis. So, what is the cost of the vMotion, what is the risk and what is the benefit, how many resources will it free up and how will it influence the resource utilization on the destination host.

It does not do a combined vMotion, it only decides which virtual machine needs to go where to solve the resource contention.

Q6. How does DRS way CPU and memory?

It depends on what is most used in the cluster, what is the critical resource.

Q7. A customer rebooted their vCenter server and this caused an host isolation response. What could have caused that (ESX3.5)?

So restarting a vCenter server should not execute an isolation response, there’s probably an other issue causing this.

Q8. How does storage vMotion/DRS impact deduplication and what are the recommendations?

When storage DRS/vMotion moves a virtual machine to another LUN it is basically new data so it will impact deduplication in a negative way. That’s why VMware recommends to set it to manual and determine if it works for your environment and what the impact is on the deduplication ratio.

One of the coolest effects of storage DRS is the reduction of management needed for managing thin provisioned disks. Because storage DRS uses the data growth rate and will try to predict how a vmdk file will grow during a period of time, which usually is 8 hours. If it detects that a disk will grow beyond the threshold that has been set, it will try to move the vmdk file to another datastore.

Q9. What is the impact of using resource pools as folders?

See the example below to get an idea how this works and how unnecessary folders/resource pools impact performance. 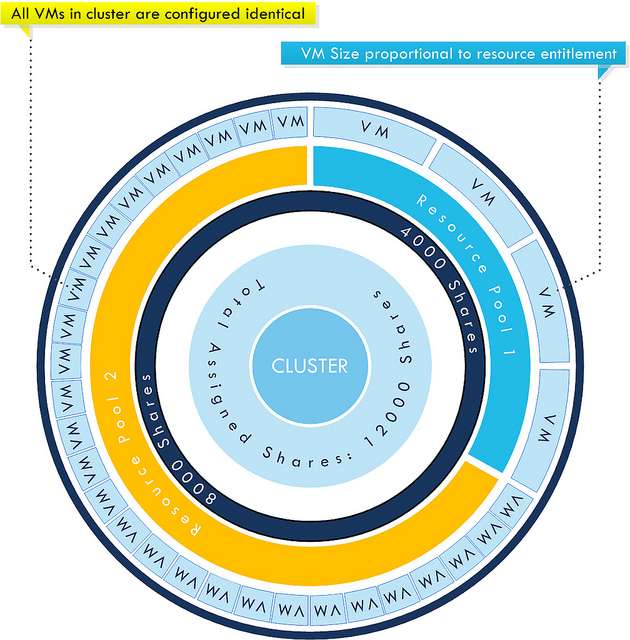 Q10. Should You use storage DRS and SRM in a single environment?

The answer is fairly simple: NO. Storage DRS is currently not supported with SRM because you will encounter the scenario where virtual machines become unprotected because they were moved to another datastore which might not be protected with SRM. VMware is working on supporting this combination in the future, probably with the next major release of vSphere.

Is VMware becoming the bad guy?