RAID 5 and 6 support for VMware VSA

by Erik Scholten 1 February 2012
All other vStuff 2

Yesterday VMware announced that it will be supporting RAID 5 and 6 with their Virtual Storage Appliance (VSA). 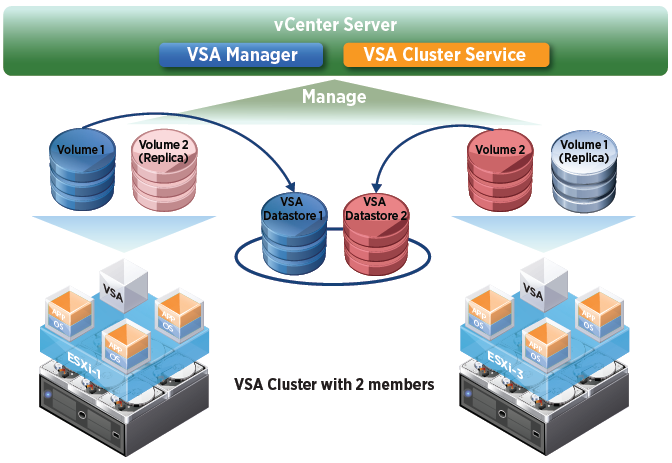 Until now the VMware VSA only supported RAID 10, which resulted in very low storage utilization. Running VMware VSA with mirroring between two ESXi server, meant that you could only use 25% of your actual storage capacity.

Now with the added support for RAID 5 and 6, VMware VSA offers a greater storage utilization rate.

RAID 10
In order to be supported, VMware required your local storage to be configured as RAID 10.  In a two node configuration, the VSA’s are in a RAID 1 for HA purposes. Using six 600GB disks in each ESXi server, in a RAID 10 configuration, will result in 1,8TB usable space per ESXi server (50%). Because the VSA’s use mirroring each VSA reserves 50% of the storage for the other VSA’s replica. This leaves us with 900GB of useable space on each ESXi server. The storage utilization in this configuration is 25%.

RAID 6
Now with a newly supported RAID 6 configuration, in a two node configuration with the same six 600GB disks. This results in 2.4TB usable space per ESXi server (67%). Because of the 50% reservation for the other VSA’s replica, this leaves us with 1.2TB of useable space on each ESXi server and a storage utilization of 33%.

So, now the VMware VSA is even more compelling for the SMB market because of the increased storage utilization. For those that are looking to virtualize to achieve business continuity benefits and don’t have the resources/capacity to deal with a SAN or NAS, VSA is a great choice. If you have evolving storage needs and need a shared storage solution to provide high performance and scalability, you may need to look for a SAN or NAS solution.