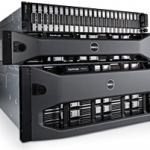 10GbE connections are getting more common in the datacenters, even for SMB 10GbE is getting within their reach. In the storage market Dell EqualLogic lagged behind large storage vendors like NetApp in functionality and connectivity but now EqualLogic released their new products on 10GbE, solving the connectivity issue.

Both the PS6000 series for large scale implementations and the PS4000 series for the less demanding customers now have the option for 10GbE with SFP+ (fiber) or 10G Base-T (copper).

The two new models, PS6110 and PS4110, both have copper (10GBase-T) and optical (SFP+) connections. The new models can be mixed with other EqualLogic units in a group. Next to the 10Gbit connections the units have a management port for out of band management.

The PS6110 comes in six configurations with support ranging from high capacity 7,200 RPM SAS hard drives to enterprise-grade SSDs. The PS6110 Series can handle up to 72TB in a single array and 1.2 Petabytes in a single group.

In the PS6110 series is available in the following editions:

The PS4110 is an entry level solution that provides most of the benefits of the PS6610, just on a smaller scale. The arrays support up to 36TB in a single array and 72 terabytes in a single group and can use 2.5″ and 3.5″ SAS hard drives.

In the PS4110 series is available in the following editions: