Recently we received a request from Synology to review their DS1512+ high performance NAS. We’re very familiar with Synology as, we at VMGuru.nl, have been using a Synology DS411j for a while now. And having reviewed the QNAP TS-459Pro II and TS-869 Pro, I’m curious how the Synology deals with the competition.

So, a couple of weeks ago, a large package arrived containing the Ds1512+ NAS. In this article, we’re unboxing the NAS appliance and setting it up so we can go and test it. The Synology DS1512+ is a 5 bay NAS appliance in a relatively small package, the appliance  itself is only 157 x 248 x 233 mm (HxWxD).  But judging by the weight (4,25kg) this is certainly not your average cheap NAS appliance. 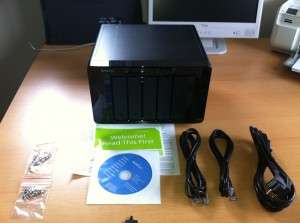 First of all, here are the specifications:

Unpacking the Synology results in a very complete package. It contains the NAS itself, a quick start manual, two network cables, a power cable, an installation CD and a lot of screws to mount the disks in the brackets. 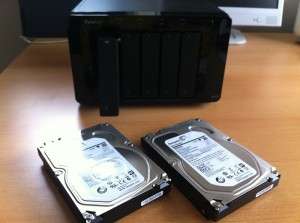 Enough specs and talk, it’s time to get this NAS up and running. For this test I needed some disks, so I consulted the Synology compatibility list. A long list of supported hard disks but beware, there are some disks on the lists which set you up for a disappointment. I selected four disk types, two from Seagate and two from Western Digital. The Western Digital disks I selected use a variable rotation speed. At the store they strongly advised against using these disks because these disks do not lock their rotation speeds at the same speed. So these Western Digital disks are not suited so I wanted 3 Seagate Barracuda 2TB disks but unfortunately these where not in stock. So I went for 2 Seagate Barracuda 3TB disks (ST3000DM001) which were also on the compatibility list. With this I will create one large volume with Synology Hybrid RAID (SHR). 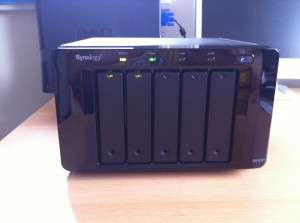 After mounting the disks into the brackets and inserting them into the NAS, I continued with the software part of the setup. This is a piece of cake. I had the Synology up and running, configured it and applied a new firmware in 15 minutes. 10 minutes of which was needed for the firmware update.