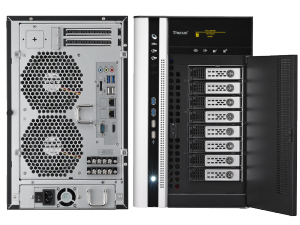 Recently we had the chance to test a Thecus NAS Server. I had not heard of the name Thecus personally, but the other VMGuru.nl guys knew it.

So I was the best guinea pig to be thrown at it. I had in mind I would test and review a small NAS box, until I saw the box that arrived. The Thecus N8850 dimensions (HxWxD) are 380.4 x 235 x 282.6 (mm) It is very smoothly finished and looks real nice. It was like unwrapping a Ferrari. In my opinion the design is beautifully executed. With a touch panel on the front and a touch power button also on the front. When powering on the Thecus the white leds on the front panel light up behind the vertical row of holes. An OLED menu is displayed on the top screen.

It is an Enterprise NAS in a Tower with 8-bays to fill. On the front there are four indicators for the several LAN connections. During the test I had two available from the on board LAN ports. So you will see LAN1 and LAN2 light up on the photo. Through Linking Aggregation I bundled both 1GbE ports, but more on that later on. 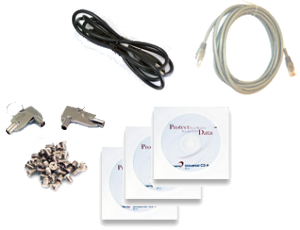 Inside the box that arrived the following bits and pieces where found:

Through the built in PCI-e slot, business users can add a 10G Ethernet Adapter for lighting fast transfer speeds, or a USB 3.0 Adapter Card to enjoy next-generation connectivity.

The specifications of the Thecus N8850 are:

After booting up the system, I could login easily without using the bundled CD. The menus are easy to follow. After entering the correct network settings, where I linked LAN1 and 2 together with linking aggregation to a 2Gbps channel, I needed to reboot the system. It takes about 42 seconds to reboot and get the services back to life, It takes a bit longer before you can login again, but I like it that the services are being restored first.

I loaded two 500GB Seagate Barracuda 7200 without paying attention that there might be a HCL drive list. After loading the disks and creating a RAID 1 set, the nice white leds turned blinking deep RED and the Thecus started beeping. It turned out that one of the disks was not 100% anymore. So I got three Seagate Barracuda ST1000DM003 disks which I placed in a RAID1 set with a spare disk for testing.

Copying to and from the box went very smoothly, I was streaming two streams with files to the NAS. One from my Windows 7 Laptop and 1 from my Windows 2008 R2 server running on a Windows Vista desktop with VMware Workstation 8. The laptop got a throughput of a whopping 97MB/s where the Windows 2008 server at the same time had a throughput of 91MB/s. I must say I was stunned. I then tested a media stream of a movie through HDMI to my Samsung TV while stressing the Thecus with reads, writes and deletions. The movie played without any hickups.

After setting up the Thecus with NFS, the ESXi server connected easily and I could make my first datastore. With a storage vMotion several VMs where placed on the NFS store. 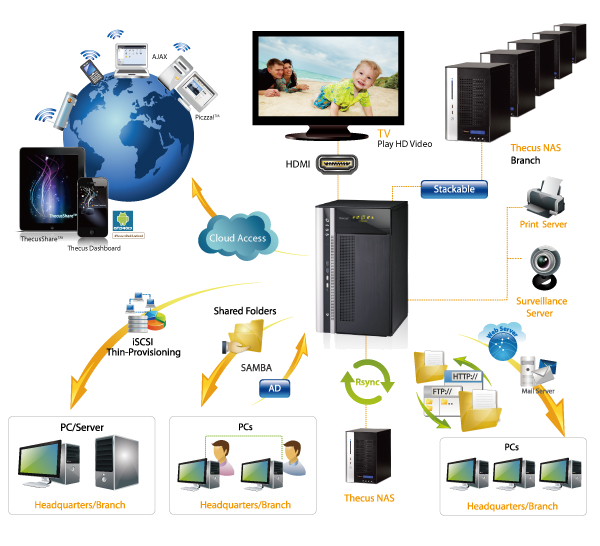 You can also manage the Thecus through an iPhone or Android phone with the Dashboard 2.0 App.

If you want to expand the services the Thecus box delivers, load up some modules! At the moment the following modules are available for integration: 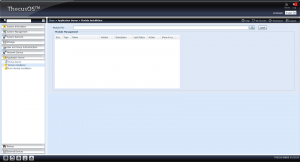 Conclusion: The Thecus TopTower N8850 is a very complete enterprise grade NAS with tons of features, bundled in a very nicely done design which blends in any office or living room. The price is a bit steep but on the other hand you will get a very complete device for it! 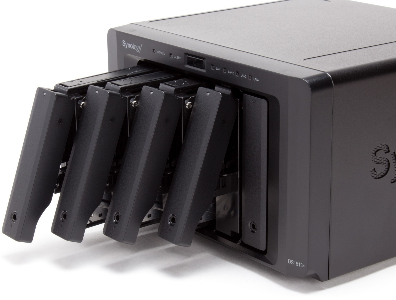