Home > All other vStuff > VMware continues to lead

The virtualization landscape is evolving. Nowadays two-thirds of x86 server workloads are virtualized, the market is mature and competitive and enterprises are evaluating the cost-benefits of switching technologies more than ever. 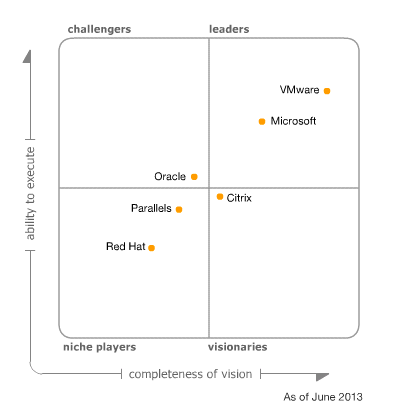 When we compare this magic quadrant with the one from 2012, we see that Oracle, Parallels and RedHat maintain the niche players. Personally I’ve never come across any Oracle, Parallels or RedHat virtual environments and I’ve seen my share of companies, from smaller SMB to large enterprises.

When we look at the big three, Citrix, Microsoft and VMware, we see that Citrix dropped out of the magic upper-right quadrant. Why?

Despite having a reliable product in XenServer, Citrix has not kept pace with the other vendors with server virtualization over the past year, in either functionality or market share. Citrix’s strategy in the enterprise has been tied to desktop virtualization (through XenDesktop and XenApp), with significantly less interest from customers looking to virtualize nondesktop workloads. This heavy reliance on desktop virtualization has slowed XenServer adoption, [……..].

This is totally in sync with what I see in my daily work. During the past years we have implemented Citrix XenApp and XenDesktop environments on a XenServer virtualization platform. To virtualize the back-end we used a VMware platform. Now, after a few years, we see that all these customers dislike XenServer and/or want a homogeneous environment and they all drop XenServer in favor of VMware vSphere.

While it has taken Microsoft five years, it has effectively closed most of the functionality gap with VMware in terms of x86 server virtualization infrastructure. Management and automation gaps on top of the virtualized infrastructure remain.

While the management functionality is strong, lack of centralized management remains an issue. Management tasks need to take place through VMM, Hyper-V Manager and PowerShell. Some tasks can be done only through PowerShell.

This is also in sync with what I see daily. With the release of Hyper-V v3 (Windows 2012), Microsoft has narrowed the gap with VMware vSphere but they’re now lacking add-on functionality like VMware Site Recovery Manager, vCloud Director, vCloud Automation Center,  vCloud Connector, etcetera.  Microsoft does have a feature rich hypervisor.

What I also see is that customers, when looking at Hyper-V, realize that the Microsoft-claim that Hyper-V is free appears to be false. A real life Hyper-V environment turns out to be as expensive or sometimes even more expensive as a VMware vSphere environment. Also, I also see customers struggling with the reliability of a Hyper-V based environment. So, in my opinion, Microsoft is definitely closing the gap but they’re not there yet. A good hypervisor is only a part of a solid infrastructure and they lack the other pieces of the puzzle, for now.

VMware continues to have dominant market share, and customers remain very satisfied with product capabilities and vendor support. However, concern over price and vendor lock-in is increasing.

VMware is still enjoying good growth, but it has slowed in the last year — at least partly due to increasing market saturation and competitive pricing pressure.

This is no surprise, VMware has a feature rich, reliable hypervisor with lots of add-ons, the customers are very satisfied and rarely choose an alternate solution. VMware excels in technology leadership and innovation, they have a clear strategy and road map.

But I do wonder how VMware will maintain a high revenue growth in a more product- and price-competitive market that is already two-thirds penetrated. Especially since VMware needs this because their business model depends heavily on vSphere revenue to expand and invest in adjacent markets.

Citrix dropped out and VMware continues to lead but the gap with Microsoft keeps getting smaller. The market for x86 virtualization is almost saturated, x86 hypervisors are a commodity and I think vSphere 6 or 7 can’t hold many new and exciting features (just to be clear, I haven’t seen it yet). The growth is in the desktop, management and automation/orchestration side of the virtualization spectrum.

In my opinion VMware should focus more on the desktop virtualization, to close the gap with Citrix XenDesktop. This year they made a big step with the introduction of the VMware Horizon Suite but I think they should not put all their eggs in one basket. So to minimize the impact of less vSphere revenue in the future, VMware should, in my opinion, invest big in the VMware Horizon Suite and make this as feature rich and WAN optimized as the Citrix desktop portfolio. As we say in dutch: “better well-stolen than ill-conceived”.

For comparison I added the Gartner Magic Quadrants from 2012 and 2011. 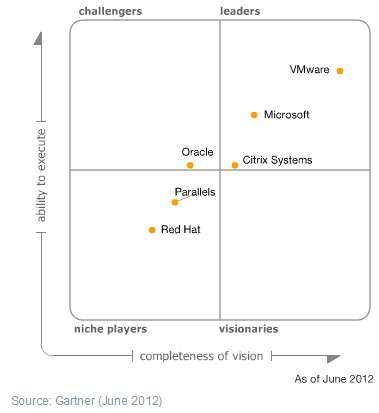 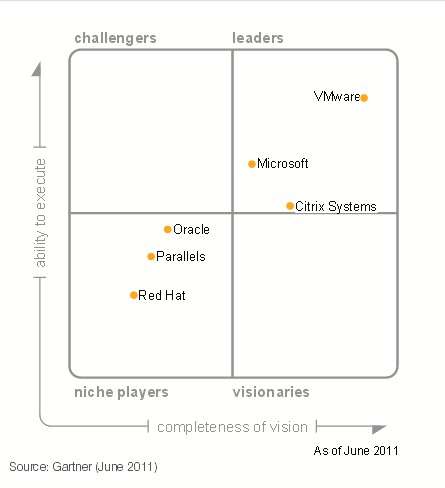