Day 2 kicks off with a keynote by Carl Eschenbach, who is the EVP of VMware.

Traditionally, the keynote of day 2 is the technical presentation and demo of the new products. This is my fourth VMworld and I only know the very dynamic presentations and demos done by Steve Herrod. Steve’s technical keynote speeches were epic, let’s see how Carl replaces him.

The great hall is packed, even the press and blogger seats are all occupied. This year 22.500 attendees made VMworld 2013 the largest IT event of 2013. Carl takes us back to the first VMworld in San Diego with 1.400 attendees. A big difference with today.

Carl runs through yesterday’s announcements, vSphere 5.5, vCloud Suite 5.5, NSX network virtualization and vSAN and hybrid cloud computing by VMware. This is the power of the Software Defined Datacenter (SDDC). Focus now on business vs IT. Business relies on IT through software. Through software VMware customers can accelerate their innovation up to 70%. The whole package will bring IT as a Service (ITaaS) to market.

Three imperatives for IT infrastructure are essential for ITaaS:

The VMware SDDC will bring all infrastructure virtualized, delivered as a service and automated through software. 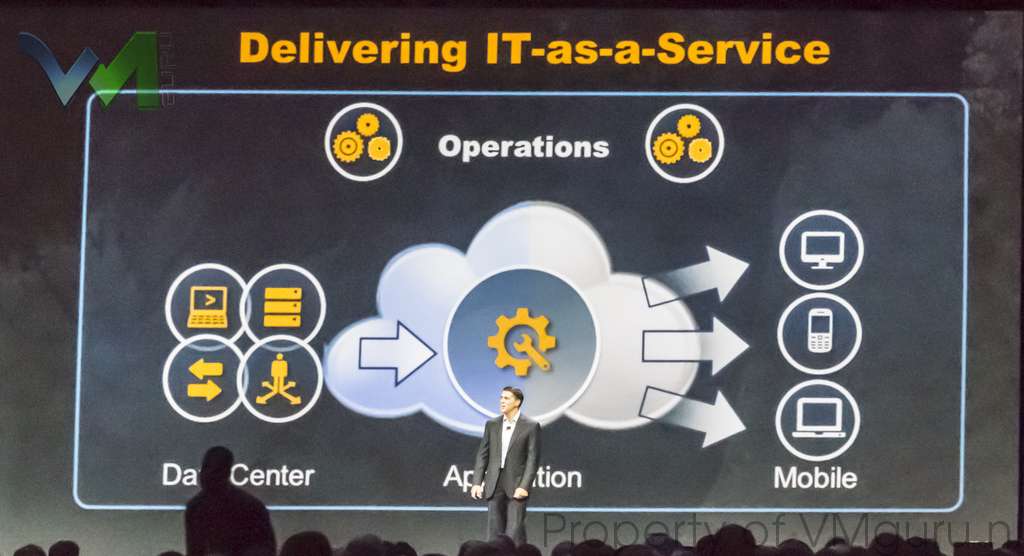 Carl brings on Kit Colbert, principal engineer of VMware on stage to demo how to bring applications to market faster. Kit explains IT is complex. IT needs to keep the lights on, IT needs to attend to all de different needs of all the different users and use cases. He demos the application deployment with vCloud Automation Center (vCAC) on a private, public and hybrid cloud.

vCAC integrates the cost of the application and where it is deployed, either private, public or hybrid, including a full breakdown of the amount. When deploying the app, it shows the option of defining the performance and service level for the database, auto-scaling and the amount of instances. After deployment IT has the opportunity to drill down into the VM’s and check their status and health.

Kit now shows vCloud Application Director (vCAD), which automates the roll-out of applications, even if the consist of 20 VM’s with different components. vCAD knows the dependency of all the components and also takes care of configuring the infrastructure. All of this runs on vSphere 5.5 to virtualize the complete workload. vCAD streamlines application provisioning with all dependencies.

Next up, networking: Conventional networking is a barrier of IT agility. It’s device centric, static in configuration and not application-aware. Networking with NSX will resolve this. NSX works like ESX, it puts a virtual layer over the network and offers L2 switching, L3 routing, fire-walling and load balancing. NSX can be controlled by vCAC.

It provisions a virtual switch for the VM’s to communicate, a router for the app to communicate to the outside world, a firewall to prevent unauthorized access and if needed load balancing. NSX is integrated with vSphere. This means that if 2 VM’s on the same host are communicating, in the old configuration, the traffic went out to the physical router and back to the VM. With NSX the host knows both VM’s and routes the traffic directly in the host. It does not go out and prevents hairpinning. Kit demos how you can migrate your current VM’s on your current vSphere environment to an environment with NSX. A VM can simply vMotion from a traditional physical vLAN configuration to an NSX enabled network, without disconnect or downtime.

Next topic: Software Defined Storage. VMware’s Virtual SAN or vSAN should radically simplify storage. vSAN takes all storage from the hosts (local drives) pulls them together into one big pool and presents that back to the hosts. It knows the difference between SSDs and HDDs. With SSDs vSAN accelerates data access. vSAN has the ability to set Storage Policies to be compliant to SLAs. The storage policy is set for the VM and attached to the VM. It will follow the VM through the infrastructure. vSAN scales from 3 hosts as a basis, with 2 HDD disks and an SSD as a minimum requirement. Adding a new host automatically extends the capacity of the vSAN. vSAN is resilient, data automatically gets replicated through the vSAN environment, so that there si always a copy elsewhere in the vSAN. vSAN is now in public beta at www.vsanbeta.com for a free beta download. 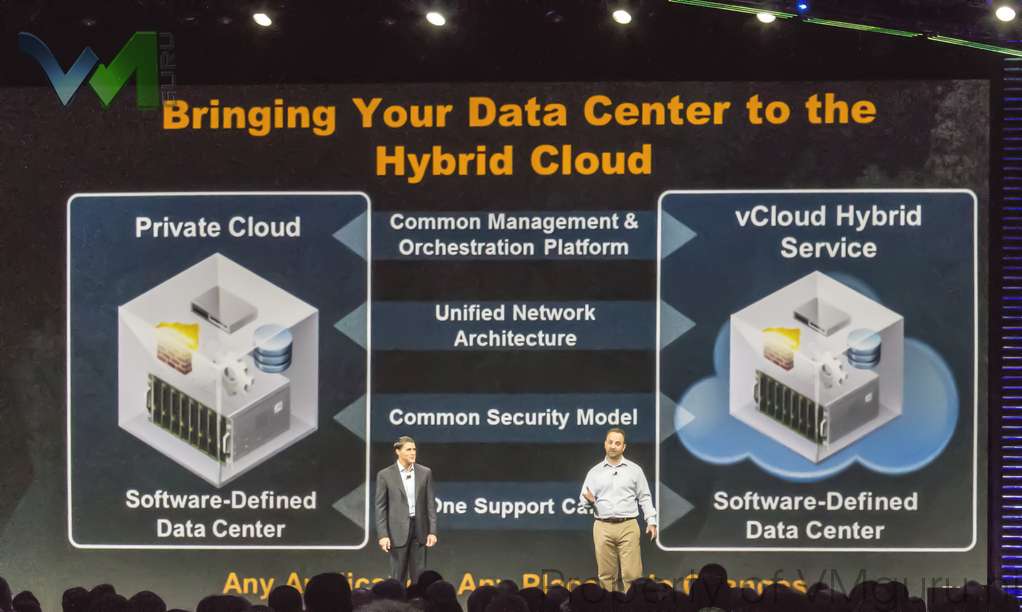 Using vCAC an enduser can deploy his own desktop to Horizon. with 3 clicks of a mouse, the desktop is deployed. With Horizon Workspace, the end user get access to their apps with their new desktop. But they can also log in with an iPad to get access to the desktop. That concludes the Kit’s demo.

Carl brings Joe Baguley, VMware CTO for EMEA, on stage. Joe explaines that the implementation of cloud forces IT to change as there is no longer a clear view on all the IT assets.

The answer is policy based automation. Joe demos an application with a problem. In the vCAC-console the tile shows up orange. Initially the app was set with the option of scaling out to an external host when a certain threshold is crossed. Based on a policy, vCOPS automatically moves the vApp to external resources to remmediate the performance problem.

Joe demos that with vCOPS integration with storage vendors, you get a full view of the components of the datacenter and all the metrics they deliver. Remediation can either be automatic (decided by the system, like to move a database from silver to gold) or guided (the application owner gets a mail in vCAC and can decide to move it to gold or not).

Joe now brings up vCenter log insight (vCLI) which is a Big Data analytics app. vCLI offers intelligent filtering to offer easy and quick analysis of problems in your infrastructure. All VMworld attendees can obtain 5 free licenses of vCLI. Check @VMloginsight on twitter for a free code.

As a last demo, Joe shows the new vCenter web console of vSphere 5.5. It has the Hybrid Cloud service access build in. You can access and manage the VMs in your hybrid cloud service from the same vCenter interface. The same templates are available. With vCAC the same application can be provisioned the same way on the VMware Hybrid Cloud service transparently as it is done on premise.

That concludes the keynote of day 2.