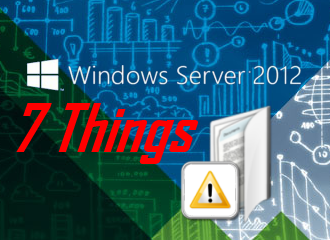 You have to license every processor on the server!

To run an instance of Windows Server software on your server, you must license every processor on the server. Each Windows Server license covers up to two physical processors on a single server. The number of instances you may run depends on the Windows Server edition license that is assigned.

The only difference between these two editions are the virtualization rights. Windows Server 2012 Standard edition entitles you to run one instance in the physical Operating System Environment (OSE) and two instances in the virtual OSE.  (For explanation of OSE see this link) You get entitled to unlimited number of VMs on up to two physical processors per server when using the Windows Server 2012R2 Datacenter edition.

There is also an Essentials and Foundation edition but those are not used in business environments or your business should have no more than 25 users which in that case maybe Essentials is an option. Foundation does not have any virtualization rights. In volume licensing you can only get Datacenter and Standard.

When using Windows Server 2012 Standard edition licenses you are permitted to use two virtual VMs on that server. If you need licenses for five or six VMs on that server you may assign three Standard edition licenses to that physical server. If you go beyond seven VMs per server it is wiser to use Windows Server 2012R2 Datacenter edition and switch to unlimited VMs.

Windows Server 2012 Licensing is all about processor licensing now

Microsoft made a change to the licensing of Windows Server to align Windows Server 2012, System Center 2012 and the Core Infrastructure Server (CIS) licensing all with one consistent model creating alignment across Microsoft infrastructure products. Microsoft reckons to have a single-licensing model will make it easier for you to buy the right product for your needs and to compare the cost of alternatives.

On the other hand would you ever do that? Because Datacenter gives you unlimited VM virtualization rights. But you could have the situation that you have some standard licenses assigned to an ESX server and you are moving to Datacenter. Make sure you detach the Standard licensing first before assigning the Datacenter license. Otherwise you are braking the terms of the licensing.

Trying to keep up with the licensing model from Microsoft looks easy but stays a challenge. Licensing Microsoft software is defined in several documents all over the place. The following documents should be reviewed and read: