Home > Whitepapers & How To's > How to harden the Veeam Backup Repository

by Edwin Weijdema 5 January 2018
All other vStuff, Whitepapers & How To's 0

In this blogpost, I will focus on possibilities on hardening the Microsoft Windows-based backup repository. Overall the most Veeam Backup Repository Servers are physical machines with storage. Make sure that your servers are physical secured. Check that only authorised personnel have access to the data centers where your backup repository servers reside. As an extra precaution or when the backup files leave the security domain, make sure you encrypt the data in the backups. You can use the built-in encryption options from Veeam Backup & Replication. For Veeam Backup & Replication encryption best practices see Veeam Best Practices – Infrastructure hardening.

How to harden the Veeam Microsoft Windows-based Backup repository?

A good way of hardening the backup repository is by running it on a standalone Windows Server with storage attached to it. Create a local account with administrative access (or use the builtin administrator) and make sure only this newly created account has access rights to the location where the backup files are being stored. Veeam needs a local account with administrative access to function properly. For best practises around hardening the Veeam Backup Repository based on Microsoft Windows see the following blog post. 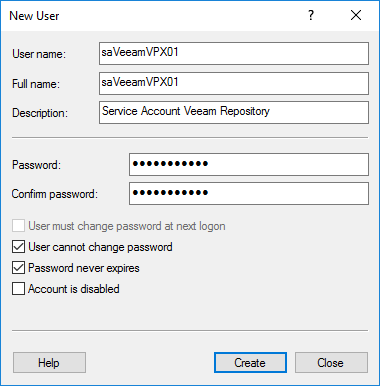 Open the newly created account and open the Member Of tab, Add the Administrators group and remove the Users group.

By creating a local Service Account specific per Veeam Backup Repository Server you increase the level of protection. In the event that one of those accounts get compromised the other Repository servers stay secure.

Remote User Account Control (UAC) prevents local accounts from running in an elevated mode when connecting from the network. Veeam accesses the ADMIN$ through the Installer Service with the local account you presented while adding the Windows server to Infrastructure in Veeam Backup & Replication.

or with the error message RPC Client is not a member of built-in Administrators group. –tr:Error code: 0x80070005 when the server was already added as a Veeam Backup Repository through Infrastructure within Veeam Backup & Replication. 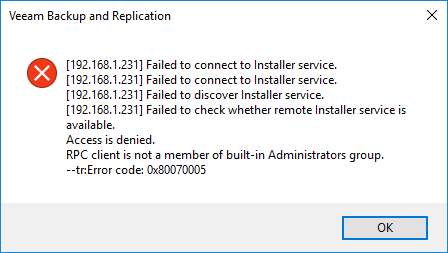 The Veeam Installer service pushes the Veeam binaries through the ADMIN$ and C$ share on the target machine. It also uses administrative shares later on for other jobs. On the Veeam Backup Repository server use REGEDT32 to navigate the registry to the following path: 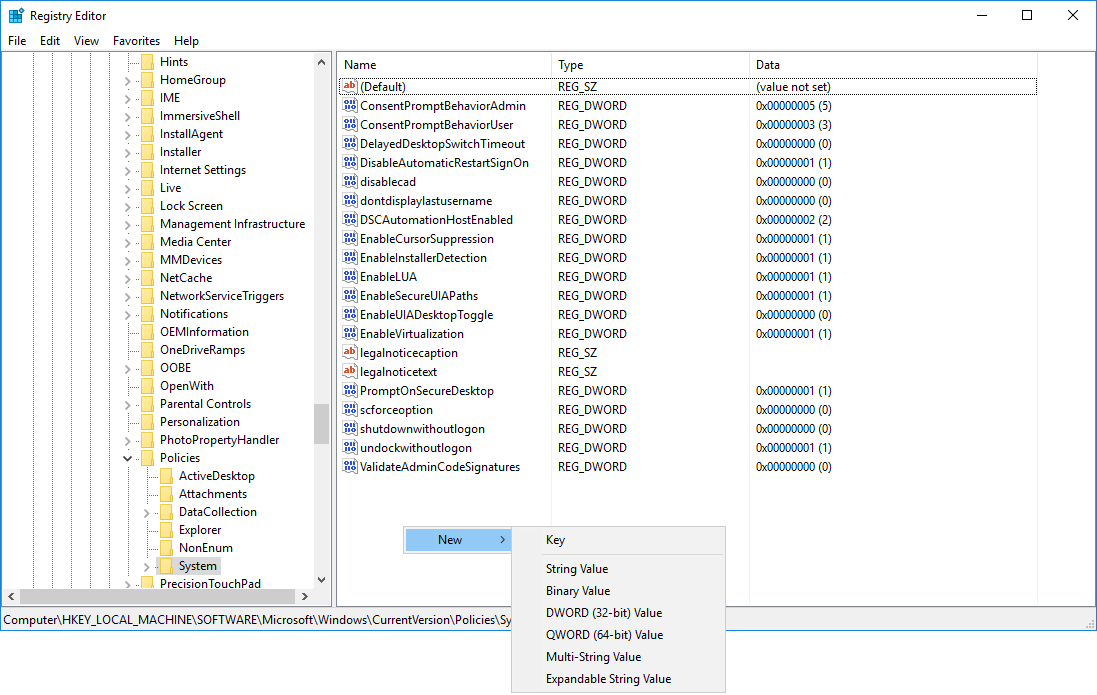 Add a new Key with type DWORD (32-bit) Value and name it LocalAccountTokenFilterPolicy give it a value of 1. No restart is needed.

Remove all accounts except the SYSTEM and the newly added local account.

Important: the SYSTEM group account can also be removed, but then the Veeam services need to start with the newly created local account instead of Local System otherwise the backups will fail. (For more information see Step 6)

After adding the newly created local account on the security tab of the disk(s) where backups will reside. Open the advanced security settings and Change the Owner. When there are already backup files on this disk make sure to tick the box: Replace all child objects permissions entries with inheritable permissions entries from this object. 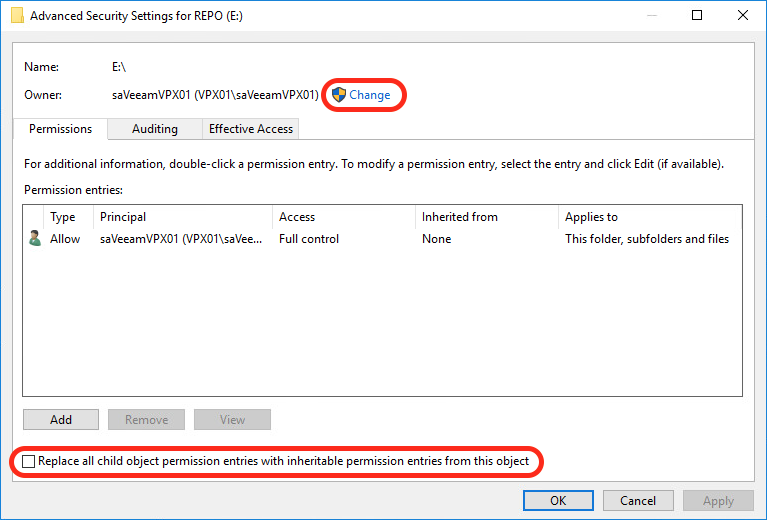 Logout with the newly created local account. Now log back in with the local administrator, you should get an Access Denied while opening the protected drive(s). 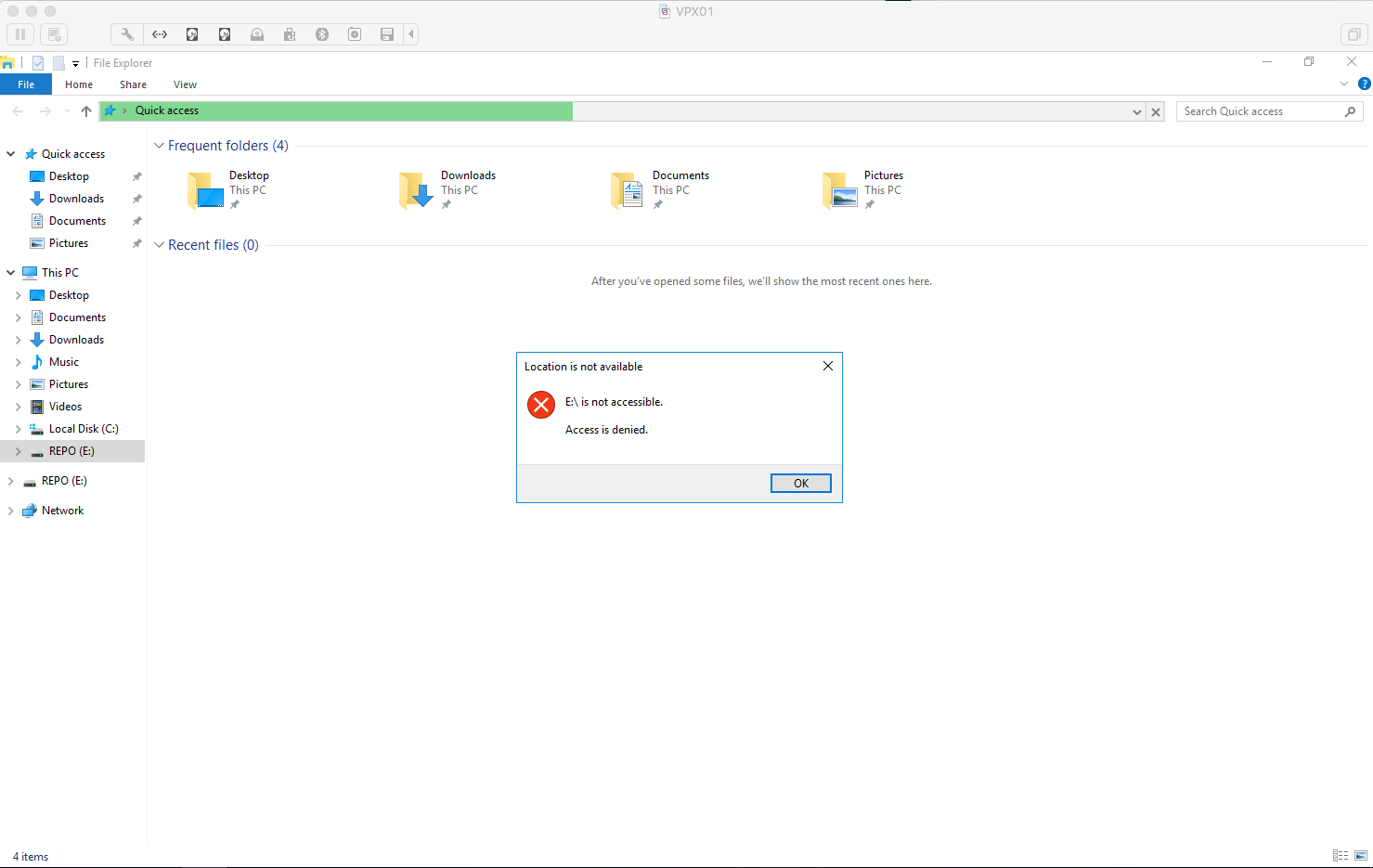 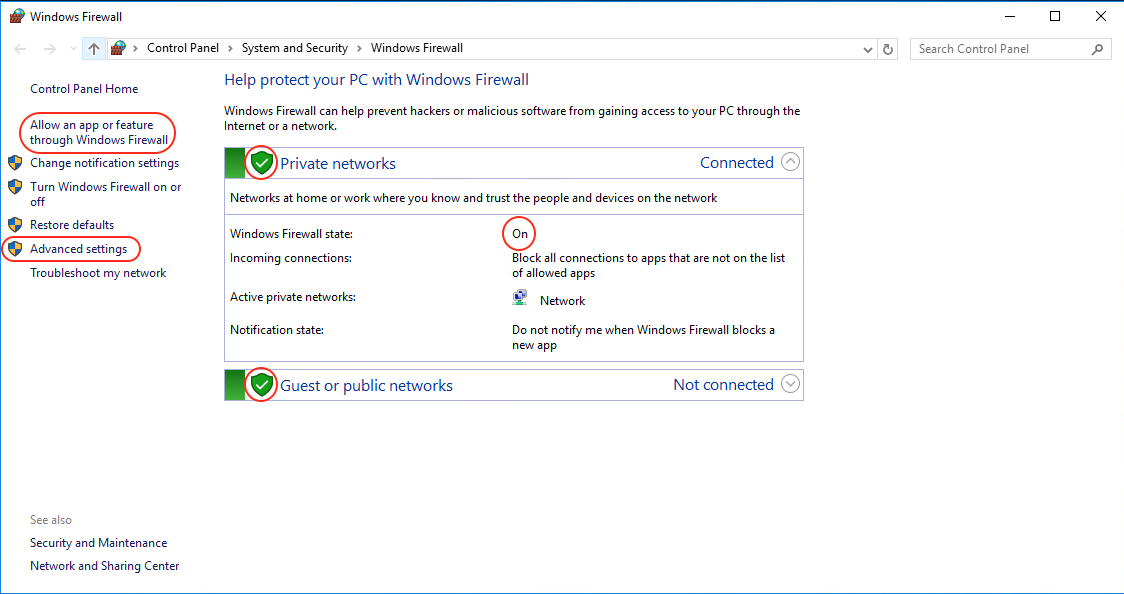 You will have two options to make the first Install of Veeam components, pushed from the Veeam Backup & Replication server, a success.

Option 1 – Disable the Windows Firewall for the Private Networks during the initial Veeam installation. This way the right binaries gets pushed to the Windows server. Veeam will add Firewall rules for Veeam during installation, which are visible as Veeam Networking in the firewall under Allowed apps and features. After the process completed successful make sure you complete Step 4a before enabling the Windows Firewall again. 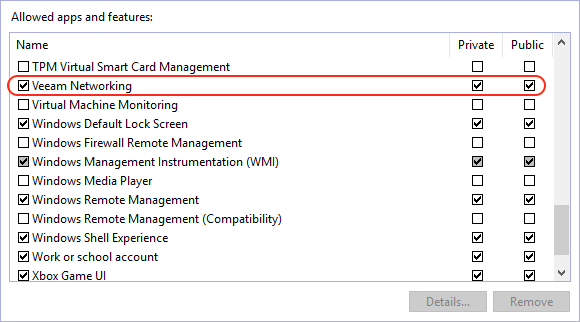 Veeam Networking will create Inbound and Outbound rules in the Firewall and they will look like the picture below. 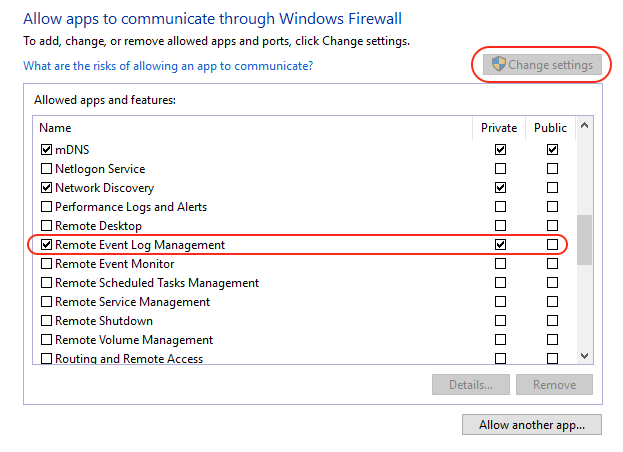 After pressing the OK button, you will return to the previous window.

Step 4b – Adjusting the Firewall rules 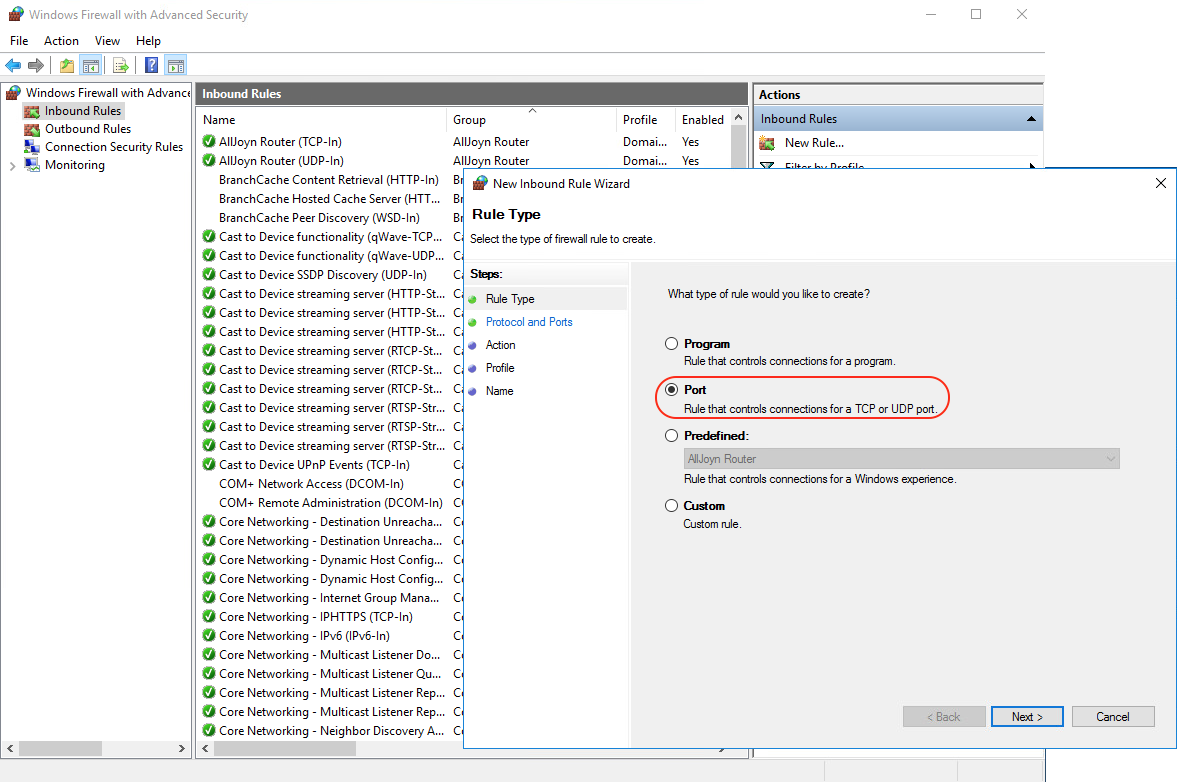 Create a New Rule with the following settings:

After creating the new Inbound Firewall Rule, you can open it by double clicking and then open the tab Scope. Here you can add the IP-address from the Veeam Backup & Replication Server under Remote IP address to Allow specific access just from that IP-Address. 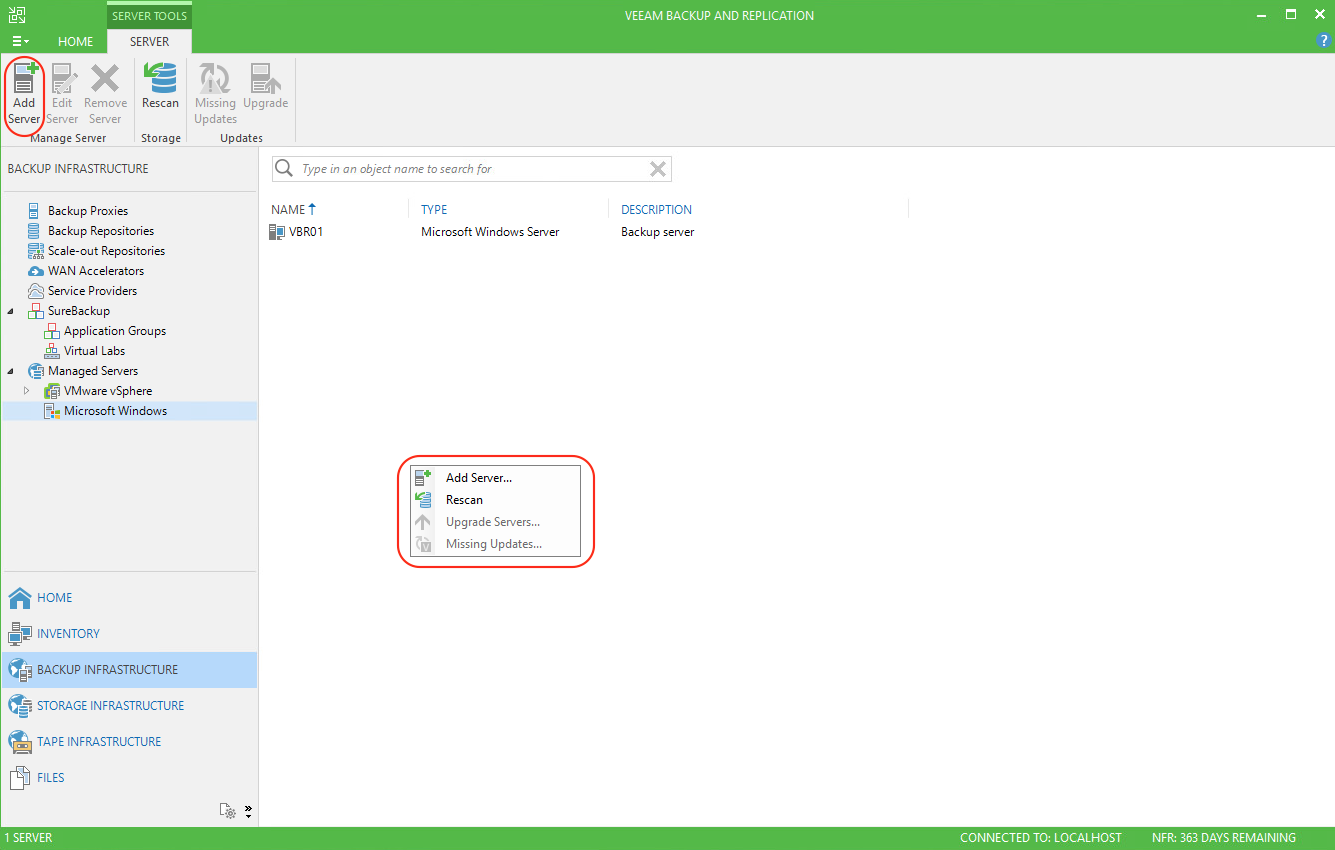 A new window will open. Fill out the fields with the FQDN DNS name or the IP-address of the new Windows Server which will function as Veeam Backup Repository. On the Credentials tab choose an already stored credential or Add a new one. Add the newly created local account from the Windows Server you are about to add. 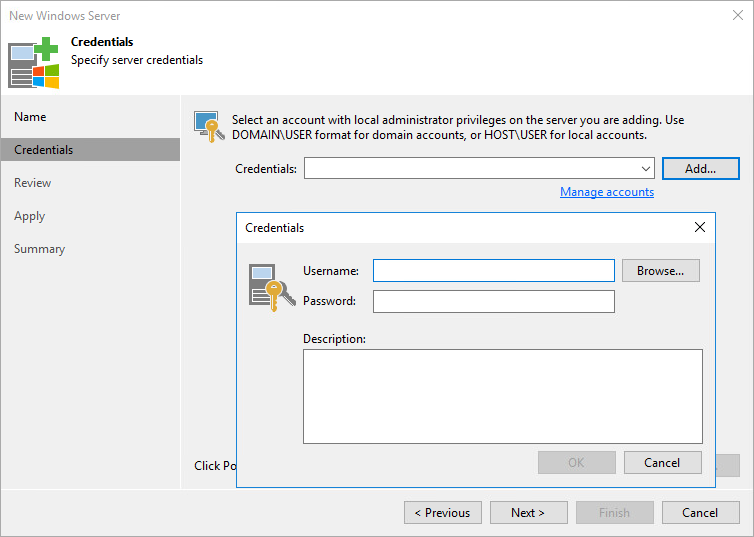 Press Next> to progress a window will open with Detecting previously installed components… This window will show if there are already components on this server. It will show that the Transport component will be installed. The Veeam Installer service will also be deployed to the new Windows Server. Press Apply. 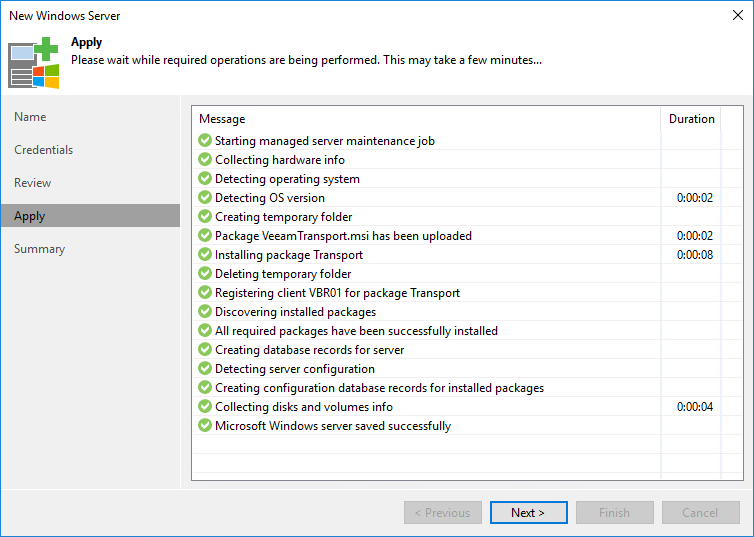 Press Next> and then Finish to wrap the initial install up. 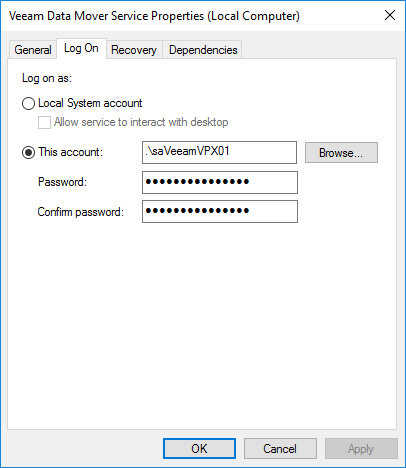 Tip: if services are running and you need to change an existing installation the new logon name will not take effect until you stop and restart the service.

You can add (or change) the backup repository by going to the Veeam Backup & Replication console > Backup Infrastructure > Backup Repositories > Add Repository. Give the repository a name and select Microsoft Windows Server on the type stage. At the Server stage select the correct server from the dropdown and press the Populate button. If you missed step 6 you will not see the Backup Target disk which you protected in Step 3. 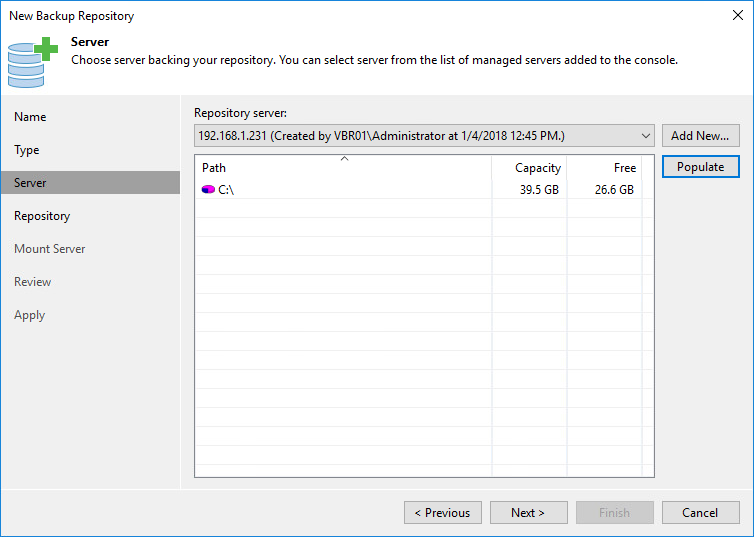 Select the Path to folder and press the Populate button to see the Capacity and Free space. You might want to open the Advanced settings and tick the Per-VM box. Press Next> to go to the Mount Server stage. You can choose to install the Mount service on this server and/or Enable it for vPower NFS Service.

IMPORTANT: If you do install those, remember to also adjust those services to start with the local service account!!

How to harden the Veeam Linux-based Backup repository? 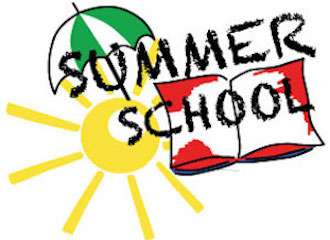 Update your knowledge at VMware’s Summerschool