With vRA 7.5 VMware is focussing on empowering IT to support DevOps. vRealize Automation 7.5 is delivering the tools IT teams need to deliver on their new mandate to support developers, DevOps admins, SREs, and developer-oriented environments across clouds. So let see what this new version has to offer.

The most visible change in version 7.5, is the use of the Clarity User Interface. This is a huge improvement. Not only because vRA looks better and is easier to use. It also makes sure that the entire vRealize Suite of products now uses the same interface. 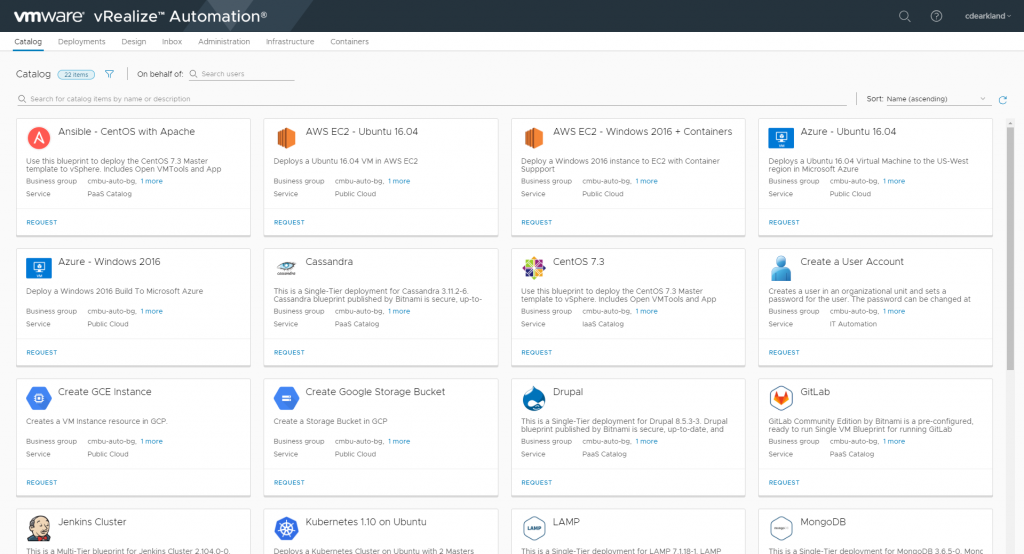 The IT services published in the catalog are now presented as cards. The nice thing is that users who have entitlements to the same item in different business groups no longer get two tiles. Now in vRA 7.5, at deployment the user will be asked in who business group the item must be deployed. This makes the catalog a lot cleaner, easier to use and it eliminates a lot of confusion.

Another nifty enhancement in the clarity UI is the option to select your desired start-screen. After logging on, do you want to start in the Catalog tab, the Inbox or your Deployements tab.

A thing that seasoned vRA users may notice is that the Items and Request tabs have gone. These two are now combined in a new Deployments tab. Again, clean, less tinsels, easier to use.

As I mentioned, vRA 7.5 is focussing on enabling IT admins to support DevOps. One of the new items to do so is the integration with Ansible Tower. Ansible Tower will now be a native endpoint in vRA 7.5.  As with the Puppet integration, integrating Ansible configuration management enables you to use your already developed profiles and playbooks into vRA application deployments. Developers can continue to use Ansible, and IT can automate the application deployment process integrated with Ansible. The integration uses the SovLabs plugin in combination with vRA 7.5 Enterprise. Enabling the integration allows you to use the Ansible building blocks in the vRA blueprint designer.

With vRA 7.5, we will be featuring a new version of the ServiceNow plugin that will be ServiceNow certified in Q3 and will now have enterprise-level support.  The plugin enables users to consume vRA catalog items through ServiceNow, based on vRA entitlements and ServiceNow governance.  This new plugin features easier plug-in configuration, multi-vRA Support, day 2 Enhancements, and custom Forms Support. By using this plugin, Service Now can act as the frontend portal allowing ServiceNow users to request services which are delivered by vRA. It supports vSphere, AWS, Azure and XaaS blueprints.

With vRA 7.5, VMware also improved the integration with vRealize Operations (vROPS) to something they call Closed Loop Optimization. In version 7.4 this integration worked for initial placement.  In vRA 7.5, vRealize Operations turns on a feature that allows vRealize Operations optimization of workloads on Day 2.  The intent is to enable cloud admins to automate not just repetitive tasks, but also the decision making process of where to place workloads as they come in and as their demand changes over time, within the constraints specified by IT Operations teams, such as target utilization levels, target performance SLAs.

Besides that, this integrations allows you to see some alerting at the deployment level as well as various KPI’s like CPU, memory, IOPS and network for VMs that are deployed with vRA.

vRA 7.5 will support NSX-T on-premises, enabling next-generation network virtualization with NSX-T within vRA.  vRA7.5 will be able to support NSX-T constructs, including load balancers, security groups/tags, and on-demand/NAT/routed networks.  This allows you to offer more choice to users, offering parity support with NSX–V constructs.  Users will get the same level of network automation experience between the two choices.

NSX-T is now supported with vRA 7.5. Key features are:

vRA 7.5 also has better support for containers. In addition to supporting vSphere Integrated Containers (VIC) and traditional Docker hosts, vRA 7.5 has integration with VMware Pivotal Container Service, VMware’s Kubernetes-based platform that enables customers to simplify the deployment and operations of containerized applications. By integrating vRA and PKS, customers can take advantage of managing Kubernetes clusters within vRA, the same interface where you can deploy infrastructure.