How to: Deploy vRealize Automation 8

As Dimitri already mentioned in his earlier post, a lot has changed. What was previously known as Cloud Automation Services is renamed to vRealize Automation Cloud and there is a new on-premises version, vRealize Automation 8. Both share the same codebase and have similar features and use cases, giving customers choice how they want to consume their automation platform.

vRealize Automation 8 is a huge change and a massive improvement compared to the previous versions. One of the improvements and the one you will experience first, is the new simple and rapid install process.  In this blog post, I will show you what the new architecture looks like and what the install and configuration process looks like.

The product itself consists of four components, which is one more than vRealize Automation Cloud:

The first two questions I get when presenting this to customers are:

And the second NO, no you cannot install vRealize Automation 8 on your own Kubernetes environment. It comes in the form of an appliance with all the bits and pieces needed to run vRA 8 and this is the only way VMware can support it.

If you don’t have a LCM and/or IDM instance running, the easy installer will set one up for you. But you can also use existing LCM and IDM configurations for vRealize Automation 8 as well.

The Easy Installer will take care of the following taks:

The term Easy Installer sounds like a marketing term but you will soon see the installation is a huge improvement compared to previous versions. In my home lab I installed LCM, IDM and vRealize Automation 8 in 30 minutes!

So let’s get started. Download the iso image from the VMware site and you will get the Easy installer which includes all three products. Mount the Easy Installer iso file and select the installer for the operating system you are running.

In my case I’m doing a fresh installation and I have no LCM or IDM running so I will chose ‘Install‘. 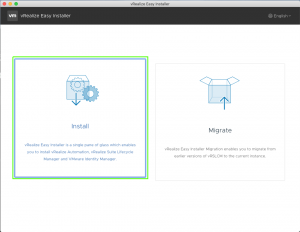 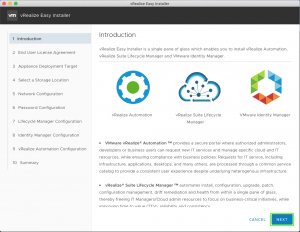 Agree to the license agreement. 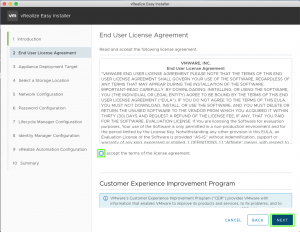 To know where to install we’ll have to define a vCenter target. The installer will connect to the vCenter using the details provided and prompt you to trust the certificate. 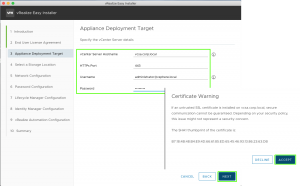 Next, select the cluster and storage to install the appliances. 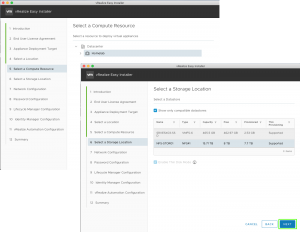 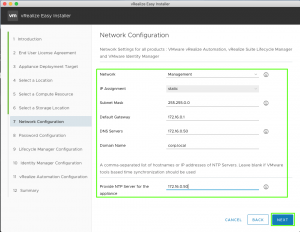 Here you provide the password which is used for every product that the easy installer deploys: 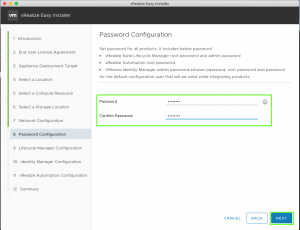 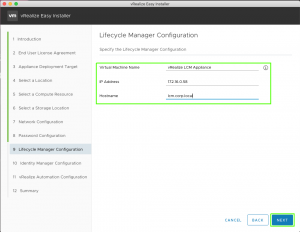 Next up we will provide the information to deploy the IDM appliance. The outcome is one fresh new IDM appliance which is integrated with LCM.

Two important fields in this screen. First the ‘Default Configuration Admin‘. This is the user which allows you to logon and configure vRealize Automation 8. Remember this one!
The second is the ‘Sync Group Members‘ which enables group membership syncing automatically when an AD group is added to vIDM which by default is not enabled. Enable this feature! 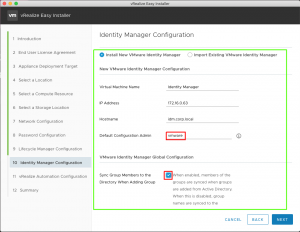 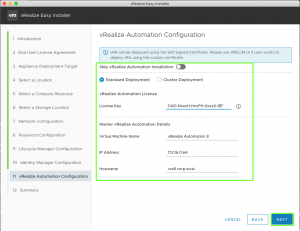 All information has been entered and now it’s time to start the installation. Click next and in 30 minutes you will have a fully functional vRealize Automation 8 deployment (Standard Deployment).

Once  LifeCycle manager is deployed the url to access LCM will be displayed. You can click the link and see the progress of the Identity Manager and vRealize Automation installation.

Login using the Default Configuration Admin account you specified during the installation. 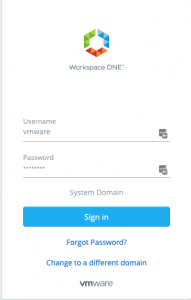 When the screen below appears, you’re ready to start the configuration of vRealize Automation 8. 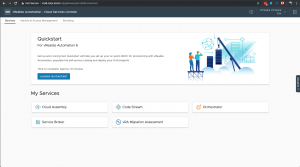 You can access the installed components at the following locations and credentials:

We will discuss the initial installation in the next blog post. 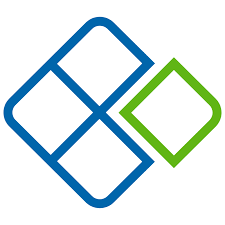